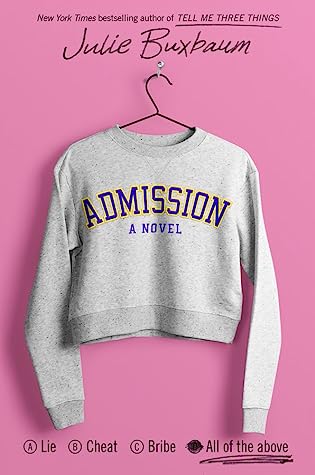 Like other pretentious people on the internet, one of my favorite things to do is watch TED talks. That was how I found out about Jon Ronson and his many fascinating discussions on internet shaming. The video I watched was called How one tweet can ruin your life, but he also has a book about the subject as well, and it's all about the pile-on effects of internet vigilantism and how a single misstep can result in devastating consequences for a person, even if their intentions weren't necessarily evil or bad.

I thought about that video a lot while reading ADMISSION, which is a VERY direct parallel to the 2019 college admissions bribery scandal that was all over the news just last year. Our heroine, Chloe, is a rich girl who, apart from her mom's celebrity and her fabulous wealth, is painfully average and ordinary. Not exactly the type of person colleges fall over to admit in other words-- especially since, as Chloe herself whines a handful of times-- her parents aren't rich-rich, just really well off, so it's not like they can afford to donate a library wing to guarantee her admission. Her parents can do other things with their money to help, though, like private tutors, special doctor's notes to give her exemptions to take her SAT tests in private, consultants, and so much more. Chloe basically just accepts it all as her due, while whining about all the work and how she's just not smart enough, so nobody is really more surprised than she is when she scores a 1440 on the SAT and gets accepted into SCC.

Because as it turns out, her parents-- but especially her mom-- did some very shady things to get that score and that admission. Things that cheated the system and probably ensured that someone who was actually deserving and did put in the extra mile work to get there didn't get accepted. And because of her mother's fame, and Chloe's own blithe, ignorant privilege, people are mad, and the other people involved in the scandal feel the need to backtrack and cover their tracks to prevent getting painted with the same brush. Her admission is revoked, her best friend and boyfriend won't talk to her and refuse to see her, she can't go to school because it is no longer safe, and people have turned her into an ugly meme online while baying for her mother to go to prison.

I think it's always interesting when an author chooses to make an unsympathetic character the narrator of the book and I thought about Jon Ronson's video a lot because I think it does beg the question: how should people talk about things like this? In this book, Chloe has no idea about what her parents are doing, but she's still blind to her own privilege, griping about how her boyfriend has a touching cancer story to put in his college essay and assuming her Nigerian friend will get in anywhere she wants just because she's Black and different. She doesn't realize how offensive she's being, and everything else is so easy for her that real work just seems to send up immediate mental blocks, because it's like she's just never had to flex those muscles before, so she can't really summon up the motivation to really try.

Unlike some of the people Jon Ronson talks about in his talks, I don't think Chloe is guiltless and it's really hard to muster up much pity for her because she does go about so totally up in her own universe. But she isn't an evil person and neither is her mother, and I don't think the author made too many apologies for people in these kinds of situations (which was my primary concern when I heard about this book). This book is a pretty good cautionary tale about self-entitlement and privilege, while also showing how toxic mob justice can be (even if that isn't the primary message). It doesn't have a total HEA but to be honest, that is probably best. Since Chloe is the villain of her own story, it doesn't really seem fitting for her to end the book walking off in the sunset when she's only really just started out on her own path to redemption.

I'm giving this four stars because it's well written and the story is very dramatic and as hard to look away from as a train wreck, but the CONSTANT flips from "then" to "now" weren't really that well done in places, especially in the beginning, where it felt very choppy. I also didn't like the romance between Chloe and Levi much at all. I stayed away from some of this author's other works because I don't typically get on with fluffy YA romances, seeing as how I am neither a young adult or a fan of fluff, and the way their relationship was written out makes me think that's probably wise.

I'll be back if she writes more timely dramas, though.