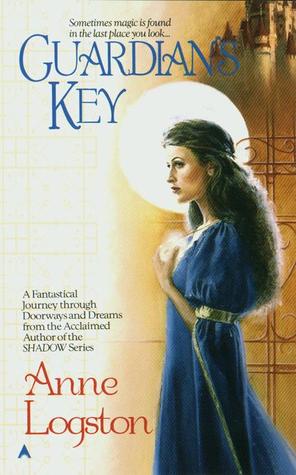 This book sent me into a book slump because I was so fucking disappointed. It was actually hard to find because it was recently pulled from ebook and I had to buy a used copy of it like a total book bitch. But someone told me that this was basically ill-concealed Labyrinth fic, and that sort of shit is my fangirl kryptonite so I was like shut up and take my $$$$. I ordered that shit used from Amazon like a champ of ordering used books and stalked the mailbox until it arrived in its little wrapper, before spritzing it with some sanitizer.

GUARDIAN'S KEY started out okay. It's about this girl named Dora/Dara (can't remember her name??) who is going to this place called the Crystal Keep to learn how to be a magician because she's poor and in love with this high lord guy whose family is a bunch of snobs that doesn't want him marrying with the poors (although it's fine when the poors serve the toast, etc.). Anyway, the Crystal Keep is owned by this hot dude named Lord Vanian who is basically Jareth with dark hair and it's pretty hot how he taunts her and pops up where he's not wanted... until he rapes her. Oops.

Honestly, I have no problem with the rape but what I DID have a problem with was one of the characters, Granny Good (e.g. Granny Gaslight) telling her that it wasn't really rape because only mind tricks were involved and not physical force (paraphrasing). I was so mad that I immediately began texting all my friends and raging about this book (as one does) and stopped reading it for a few weeks. If you're going to have non-con or dub-con FUCKING OWN UP TO IT. Don't be an apologist in the narrative subtext. I was mad. But every time I went into my bathroom, this book sat there mocking me, for my failure, and my lost hopes, and so I decided to sit down and skim-read it to the end.

GUARDIAN'S KEY is like half-plucky 90s heroine fantasy in the vein of Tamora Pierce or Catherine Asaro and half-bodice-ripper fantaporn adventure, but it does things by halvsies, so it ends up feeling really inconsistent in tone. There are dark scenes, like the heroine's near gangbang at the tiny hands of a swarm of rapey elves, and then of course, the rape by Lord Vanian, and then there's her Hoggle-like companion Gespry and all of her fun little traipsings through the Keepyrinth that feel much younger in tone and there's no explicit sex scenes, so I was like, omg, it's like Scooter's Magic Castle but with dub-con and rape apology. Hooray.

I'm not giving it the full one star because LV was hot and in the hands of another author, I think I would have been like hnnnnng. Also, the Labyrinth nostalgia of the Keepyrinth was pretty fun. I'm just pissed that this book went hardcore wack on my expectations and also I'm drinking some pretty strong wine right now and am therefore naturally inclined to become more forgiving.