Poisoned Water: How the Citizens of Flint, Michigan, Fought for Their Lives and Warned the Nation by Candy J. Cooper 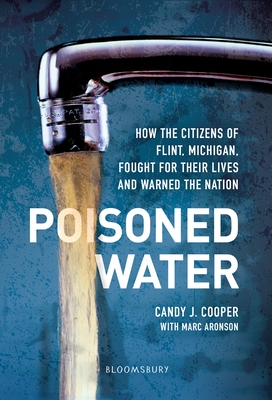 POISONED WATER is about the water crisis in Flint, Michigan. Most of you are probably familiar with it because for a while, it was splashed all over the news. To save money, residents were switched from Detroit-routed pipes fed by Lake Huron to a direct line piped in from the Flint River. Soon, residents were getting disgusting-looking water in various colors of brown, and started suffering conditions ranging from skin rashes to Legionnaire's disease. It turns out that not only was there microbial contamination from the water (gross), the chemicals that were being added to treat the water (at the ridiculously underfunded facility-- $8 million budget to upkeep something that should have cost a conservative $60 million) were being added without chemicals to prevent corrosion, which was resulting in all the metals from the pipes filtering into the water, including lead.

What makes it worse was that the officials responsible for the change from Huron to the Flint River were, in the words of the book "aggressively dismissive" to residents voicing their concerns over whether the water was fit for themselves and their families to drink. One woman was accused of dying the brown water in her bottle herself at what I believe was a council meeting. A dossier of scientific data collected by a leading expert in water safety was brought in to officials who even refused to touch or accept it. To save the town money, they switched to water that already had indications of being unfit to drink, and in an ironic twist of fate, anything that was saved was lost in the legal fees from the investigation of the mismanagement.

According to the back of the book, this is middle grade nonfiction. I don't really think this is middle grade-appropriate, just because the writing level is very science- and data-heavy, and it uses language that I, a thirty-something millennial with a Bachelor's degree, needed to think about. I certainly wouldn't discourage a kid from reading this who wanted to learn more about Flint and social justice, but I also think that it would be a struggle for a lot of kids. That said, I think it's definitely worth the read-- for kids and adults-- because it really delves into Flint's sad history as a racially segregated town (and race was probably a factor in why Flint was ignored; institutional racism is a huge problem, and even if it isn't the root cause of a given issue, it can help foster the symptoms and keep them lingering), its brief boom in the peak of the automotive industry, and then its collapse and penultimate ruin when GM went under (before being bailed out).

It's a depressing and hard book to read, but in a sad, twisted way, it's also inspiring. Seeing how the community banded together and refused to listen to the officials who were very clearly in the wrong was an incredible feat. Especially when they managed to get scientists and experts on the phone who, in turn, helped the people of Flint gather the incontrovertible evidence of the harm that they needed to force the switch back to Lake Huron water. It was grassroots community activism, and it's a shame that it came at such a terrible cost. FWIW, the book does end on a hopeful note, though.