White Negroes: When Cornrows Were in Vogue ... and Other Thoughts on Cultural Appropriation by Lauren Michele Jackson 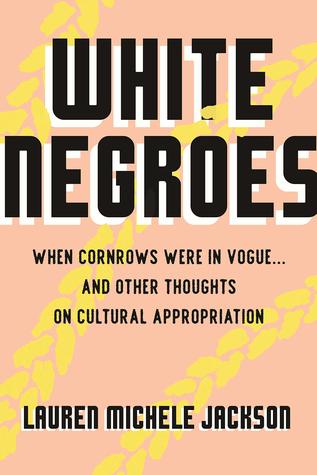 Wow!! What a great collection of essays. Considering how short this book is, I am honestly so impressed by how thorough and detailed each of these essays are, and how each one of them stands alone and comes full circle by the end of the chapter. By the time I finished and closed the cover, I felt like I had learned so much. Cultural appropriation is one of those terms that tends to put people on the defensive, even though it's really important to understand why it's harmful, and how it relates to privilege.

This book is all about cultural appropriation and privilege, and it's written in a way that makes it virtually accessible to virtually everyone because of how concisely and logically it identifies problematic behaviors and why they cause pain. I challenge even the most bigoted person to pick this book up and not learn anything from it. Even if you don't agree with the author, you will at least understand why it's upsetting to individuals of color when white people don pastel locs to fashion shows or Coachella, and how erasure and white-washing remove people of color from key discussions about race and equality, and even from pop culture.

Some of the subjects that the author wrote about that I found particularly interesting were, of course, the appropriation of black and rap culture by white people (focusing specifically on Miley Cyrus and Christina Aguilera, but also applied more broadly) and how that ties into the fetishization of people and women of color; cultural appropriation in fashion (tying back to the title of the book, and focusing on locs and box braids); black slang and Black Twitter and how pop culture borrows from the innovations of black people without giving credit or acknowledgement, leading to the ultimate white-washing and erasure of the origin of these references; Paula Deen, and the idealization of the historic South (while omitting slavery); activisim, feminism, and intersectionality; and then, throughout the book, the importance of BLM and how racism influences oppression and inequality.

When I put down this book, I actually thought to myself, "WOW." In all caps. Wow, I learned so much and I still have so much more to learn. Wow, this book is so important and everyone should read it, because it will either validate you or educate you (or both), and it's written in such an affirming, engaging way. Even though the title is somewhat provocative and controversial, the text is not. It's matter-of-fact, and just states things as they are (with evidence to back it up). Racism is still a HUGE problem in the United States, and the world at large, and I think having dialogues-- as the author did, by writing this book-- and laying out these issues in the open where they're much harder to ignore is a key step in tackling the inherent inequality that is still such an integral part of our country's makeup. Read this book and boost this author-- she's amazing. I can't wait to see what she does next.