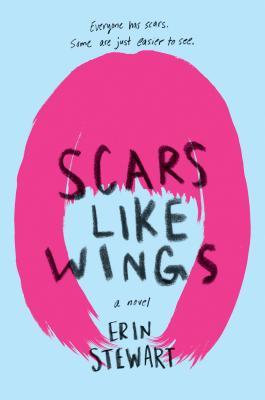 SCARS LIKE WINGS packs an emotional wallop and was probably one of the most difficult YA books for me to get through this year because it could be so devastatingly tragic and heart-breaking at times, even though it had its lighter points. In X meets Y formula, I'd say that this book is like WONDER meets THE FAULT IN OUR STARS, in that it is about disfigurement and disability, and also about the power of support groups and having a purpose in the recovery process, and how recovery isn't always a straight uphill journey, and the importance of recognizing that.

Ava divides her life into two sections: Ava Before the Fire and Ava After the Fire. She is the only one to survive the house fire that killed both her parents and her cousin/best friend. Now she lives with her aunt and uncle, covered with burn scars and still filled with the loss of her previous life and her loved ones. Under pressure from her aunt, Ava goes back to school and it's about as horrible as you might expect, because kids can be so cruel.

Her one friend is actually a girl from her burn support group, a girl named Piper who is filled with pep and verve and defiance, and basically embodies everything that Ava wishes she could be. She gives Ava the confidence to stand up to her bullies and renew her interest in singing, which was her passion before her injury. It seems like things might finally be turning around, especially with an exciting new surgery on the horizon, but Piper's friendship is somewhat toxic, and Ava is finding out that Piper wasn't exactly the best friend in her previous friend group, before they ended up estranged from Piper's injury. Worse still, some of the kids in her drama club don't want her onstage, performing with them, and when Ava gets a crush on a boy at her school, it forces her to confront her own self-worth, and see it separately from what other see at face-value.

This book broke me. Ava's grief over the loss of her family broke my heart again and again. I felt so bad for her, and the many cruelties that she suffered at the hands of others. She never got a break. Since I was in her corner from the beginning, it made every "win" extra satisfying, because it felt like they were so few and far in between. Ava was a great character and she was done so well. I also loved Ava's aunt and uncle. Their love for their niece was so pure and I loved that they loved her on her own terms and not just as a surrogate daughter. Everything about that family was pure gold.

I was less a fan of Ava's friendship with Piper and Asad. I felt like her relationship with both of them could be kind of toxic, especially with Piper. I guess kids are cruel, even when they mean well (or want to mean well), but it was still kind of upsetting. I wanted better for Ava and didn't feel like she got that here, even if she ended up loving herself again because of (or in spite of) her friends.

SCARS LIKE WINGS is a really great book and I like that it has a happy ending. There were some things about it that required a suspension of disbelief, but overall I think it did a great job not only portraying what seemed to be an accurate representation of someone with severe burns going through the physical and psychological recovery process, but also about finding yourself and your identity as a teenager, and what it means to truly overcome adversity and love yourself when others don't.