A Long Petal of the Sea by Isabel Allende 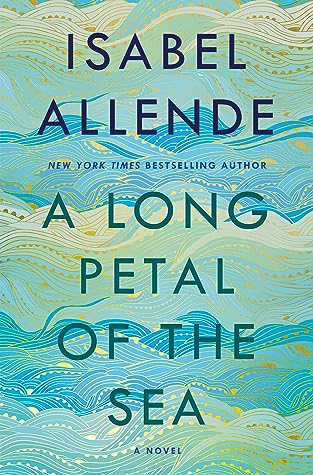 I've read a lot of Isabel Allende's stuff before and I really like some of it, but some of it is also too weird for me. A LONG PETAL OF THE SEA is actually a pretty good introduction to Isabel Allende because it's mild, and doesn't have any magic realism, so you get a sense of her literary style without the surrealism that can sometimes make her stories hard to follow.

A LONG PETAL OF THE SEA is set in Spain in the 1930s, under the fascist regime of Francisco Franco. A rift is beginning to form, and those who do not follow his tyrannical ways suffer or disappear. Roser and Victor are a young couple who end up fleeing as refugees to Chile. Their marriage is one of convenience so they can both be sponsored by Pablo Neruda to contribute to Chile's economy in new positions (as a musician and a doctor).

One of the things I liked best about this book is that it's like one of those epics from the 1970s and 80s-- it follows Roser and Victor throughout their entire lives. Roser's history is especially interesting, as she came from nothing, and was adopted by a rich old man, only to fall in love with a soldier who died before they could be officially married, leaving her as a single mother. When she marries Victor, her brother-in-law, they aren't attracted to each other at all. He only marries her to be a father to her son, Marcel, and help get her into Chile as his wife.

Victor is definitely a kind man, although he makes mistakes (one of which is having an affair with the daughter of a wealthy landowner, Ofelia). It's not really cheating since their relationship (the one he has with Roser) is open, and both of them plan to get divorced eventually, once they go back to Spain. Their platonic relationship actually gives them a really strong bond, though, and eventually, after so many years of companionship and shared experiences, Victor begins to fall for her for real.

The end of the book is a little sad and bittersweet, but not for the reasons you might think. A LONG PETAL OF THE SEA is a very timely book, because it shows how immigrants and refugees can contribute and add to a country's culture and economy, as well as the inevitability of our mortal ends, and the importance of having a life well-lived, surrounded by family. It's definitely a much better book than THE FOUNTAINS OF SILENCE, another book about fascist Spain that definitely skates over the oppression. In A LONG PETAL OF THE SEA, you feel the stakes-- and they are weighty.

I'm not giving this a higher rating because it could be boring at times. Allende does a lot of recounting, more telling and less showing. It gives it an almost fairy-tale quality at times, but at other times this matter-of-fact play-by-play of every character's actions was hard to pay attention to, and I occasionally caught my mind drifting while I was attempting to read. I did like the story, and the characters, and-- again-- not to hate on Ruta Sepetys, but I'd take Isabel Allende over Ruta Sepetys any day, and if you're going to read a book about fascist Spain, this is the one you should pick.