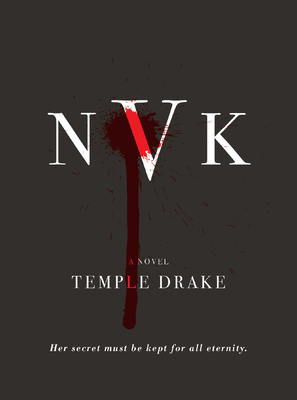 I just finished beta-reading for one of my author friends, and I have a love-hate relationship with beta-reading for this author because nobody else writes stories like her, so whenever I finish one of her books, I always end up in the grand mother of book slumps-- at least until I get my hands on my next fix (WRITE FASTER). I was in a gloomy and creepy mood, and wanted to read a book that was densely atmospheric, rich with erotic horror and morally grey characters. Much to my surprise, I found that in NVK, and it helped get me out of my slump because it was exactly the type of book I wanted.

NVK is one of those books that kind of feels timeless. Reading it reminded me of the vampire and supernatural horror movies from the 80s and 90s, like Fright Night and Lost Boys, where they weren't strictly horror, in that they had romantic scenes and storylines, and explored themes that had more depth than their slasher movie cousins that seemed to serve more as morality plays dressed in gore. It was so good, and the suspense was kept up nicely throughout the story.

Set in China, NVK is about a Chinese executive named Zhang who becomes enamored with a mysterious Finnish woman named Naemi. Zhang is a man that has everything, so the elusiveness of Naemi and the way she constantly keeps him hanging fascinates him. They end up dating and sleeping together, and becoming quite fond of each other, but there is something that is not quite right about Naemi. An old man recognizes her in a restaurant and thinks she's his friend from his college days, even though she's only in her twenties. One of Zhang's close friends is insistent that Naemi is a ghost with unfinished business. And Naemi herself, with her strange eyes and the mysterious scar on her upper arm, often defies human qualities, to the point that she seems otherworldly.

This book was great. I see that it's the debut work of an author and supposed to be the first in a series, which has me very excited. I would gladly read the other books in the series by this author, because this one had such a great vibe. The spare writing managed to conjure up incredibly vivid scenes, and I liked the morose sense of doom that hung over the story, from start to finish. It's definitely not a read for those who want their books to be all sweetness and light, but I really enjoyed it.