Laughing with Obama: A Photographic Look Back at the Enduring Wit and Spirit of President Barack Obama by M. Sweeney 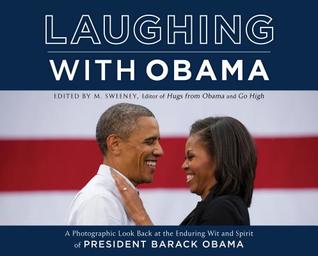 I don't think I've been this excited about receiving an ARC in a while. LAUGHING WITH OBAMA consists of many quotes taken from Obama's speeches, paired with heartwarming pictures of him laughing, smiling, joking around, and just in general being Classic Obama (i.e. Cool Dad, level 80). Reading LAUGHING WITH OBAMA was bittersweet because Barack Obama was such a lovely, decent human being, and it's just heart-breaking to compare him to the sorry excuse of a leader we have now. I tried not to think about that too much while reading, though, and just tried to focus on the photographs instead, which were lovely.

I actually just read another Obama-themed coffee table book recently (I'm not a stalker, I swear), which was called OBAMA: AN INTIMATE PORTRAIT. That book was published by the official White House Photographer, although it served a similar purpose: to show what a great man he was. LAUGHING WITH OBAMA definitely focuses on his more light-hearted side. He comes across as so natural and relaxed, no matter who he's with. I think his ability to relate to people was one of his strong points, and I honestly believe with all my heart that for a politician, he was as genuine as it's possible to be and that his heart was in the right place. The pictures of him with his family and especially his wife were so touching. Where can I find me a guy who looks at me the way Obama looks at Michelle? I mean, really. #CoupleGoals

If you are a fan of Obama and want a book that catalogues his glory days, this is a great book to own. The selection of quotes is great and they are paired alongside pictures that are amusingly appropriate. If you don't like Obama, I don't know what you're doing on this page, but this book probably won't be for you and looking at it will just make you angrier, so you should probably leave for your own sake. Otherwise, I really don't see how anyone could read this book and fail to smile. I love Obama.