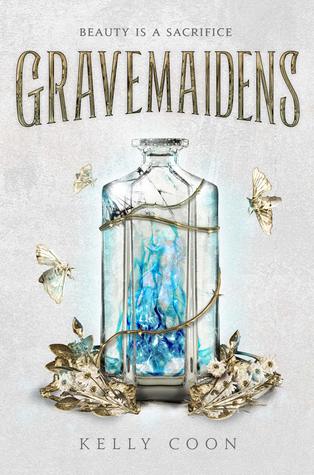 GRAVEMAIDENS is set in a world that seems to draw inspiration from Ancient Egypt/Ancient Sumerian society. Kammani, the main character, is a healer. Her parents are both dead and her family is in disgrace after her father failed to heal the royal son. Now the king (called a lugal) is dying and Kammani is called in to save him virtually as the same time as her younger sister Nanaea is given the "honor" of becoming a Sacred Maiden, basically part of the king's death harem that will join him in the afterlife when he dies-- and yes, that means murder.

Kammani has to save the king from dying and save her dumb younger sister from being ritualistically killed, but when she gets closer to the royal court she discovers all kinds of sneaky goings-on that suggest that nothing is really as it seems. Which sounds like it should be really good, right? Nothing gets me hook, line, and sinker like a hot court intrigue novel, and if it's got scheming and murder and danger, so much the better.

The problem is, well, several things. I don't think the world was adequately developed, for one. All the terms were very confusing and I didn't really get much context for what Kammani's world was like. Except for some bursts of startling violence that seemed to be there to show some "stakes," everything was very bland. Second, the way the characters all talked was very modern and didn't really fit in with the Ancient Society vibe this book had going on. Third, Kammani was a totally repulsive little twit. So much whining. She's one of those characters who's beautiful but doesn't know it and claims to be so smart but makes all the dumb mistakes. Minor spoiler, but for a character who is supposed to know ALL the plants and remedies, she doesn't know poison when she sees it? As the French say, Quel dumbage. None of the other characters were that much better. Nanaea was also annoying, and since Kammani is supposed to be involved in this to save her, it felt extra unbelievable because there was literally no lost love between them. None. Every time the two of them were together, they were fighting. Somebody didn't get the character/world-building memo.

I think GRAVEMAIDENS had a good initial concept but it just ended up feeling too derivative, reminiscent of books that had similar concepts but did it better. I pushed myself to the end because I was hoping for a twist that might end up saving the book, but it ended up being a convoluted mess that felt like a stretch and really tested some of the character development we'd seen so far (especially what she did with two in particular, and their conveniently deteriorated mental states-- it didn't make ANY sense). I'm trying to keep this vague, because I don't want to spoil anything major for those who are still excited about reading the book, but if you get to the end I think you'll know EXACTLY what I'm talking about. This was a disappointment-- and from the sequel-baiting at the end, there isn't a whole lot of closure here, either. Yikes. I'm sorry to say it, but this was a huge disappointment.