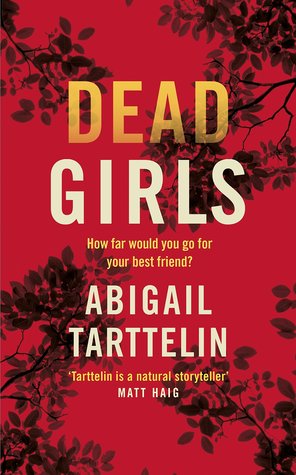 What if Alice Sebold's LOVELY BONES started a preteen version of Lisbeth Salander from GIRL WITH THE DRAGON TATTOO? You'd get this book, that's what. Wow, this book was creepy-- in the best possible way. DEAD GIRLS takes place in England, in the 90s, and is about two girls who are best friends: Thera and Billie. Thera is the clever one who thinks up all their games, and Billie is the pretty, bold one who goes along with everything. They're opposites, but nothing can separate them-- except for murder.

When Billie goes missing, Thera's small village is filled with paranoia, suspicion, and curfews. Suddenly, all the adults keep throwing around words like "pervert," without really explaining what that means, or why Thera should fear them. She comes to the conclusion that a pervert is a type of man who likes to hurt young girls, and decides to take it upon herself to find her friend's murder and avenge her death. It seems endearing and harmless, until, suddenly, it isn't, and the reader can't help but wonder how far and to what lengths Thera will go to find out what happened to Billie.

I really enjoyed this book. It's actually similarly titled to another mystery about young girls I read recently, called THE DEAD GIRLS CLUB, and like TDGC, DEAD GIRLS also has a supernatural element to it. Or does it? That's what I love about both books-- they follow the traditional missing girl formula, but then add a supernatural (or not) twist that makes it the perfect October read. Of the two, I think I actually liked DEAD GIRLS better because it does such a great job capturing the vibe of what it was like to grow up in the 90s. On the one hand, you have Spice Girls, S Club 7, and Nanos (as in, the digital pets on key chains, not the iPods), but on the other, you have the fear of stranger danger paired with an unwillingness by authority figures to talk about sexuality and abuse.

DEAD GIRLS will definitely appeal to genre readers, but I also think anyone who enjoys stories of suspense with morally grey hero(ines) will enjoy the book as well. I'm not giving it five stars because the ending wasn't entirely satisfying (and not just for the obvious reason-- there were some loose ends I won't go into because spoilers, although it involved the "supernatural" element), and I felt like it was a little too obvious whodunnit (to me). It was still a fun read and passed the time, though, and what more can you ask of a creepy book in the creepy month of October? Exactly.