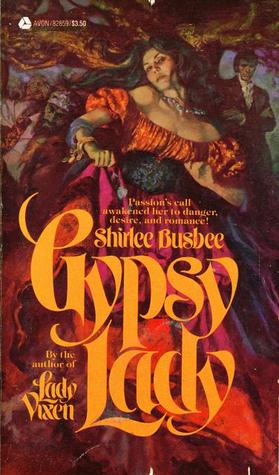 It's been way too long since I've picked up an old skool bodice ripper. I've been on a fantasy binge lately, and it's been absolutely swell, but the desire for bodice rippers was eating away at me like an itch that I couldn't resist. GYPSY LADY has been sitting on my bookshelf for two years, ever since my mom bought it for me as a birthday present. I'm one of those people who hoards books they're really looking forward to reading in order to build up the anticipation until the time is right, and when I spied that bright cover, I thought, "It's time."

As you might have guessed from the title, GYPSY LADY is not a book for the PC-set. It's about a girl named Catherine Tremayne who, along with her brother Adam, was kidnapped by gypsies when she was young and then returned to her family as an adolescent. She has been raised as a young lady but still enjoys frolicking in the nearby gypsy camps under the name they gave her, "Tamara."

The hero is named Jason Savage, although you could argue about whether or not he's actually a "hero." The book opens with him as a young man in an Aztec tomb, marveling at the treasure with his three friends, Nolan, Davalos, and Blood Drinker. Blood Drinker and Nolan are skeeved out, but Jason and Davalos decide to take a small piece of treasure, vowing that they'll come back some day for the rest.

Flash forward to the early 1800s, and Jason is now a man of wealth and privilege in his own right, running errands for President Jefferson to facilitate the Louisiana Purchase. He tomcats around and sleeps with Catherine's slutty and stereotypically evol cousin, Elizabeth, but when he sees Catherine at the gypsy camp, he decides that he must have her, and being a noble man, she can't say no. She tricks him by sending a decrepit old gypsy woman to his bed, who he almost has sex with by accident, and the horror and humiliation of this is so great that he decides a bit of rape is in order.

At first, he keeps Catherine as his mistress and rapes her a few more times (which she decides she likes, traitorous bodies and all), but when he finds out that she's actually a lady, he is forced to marry her; an insult to his manly pride, which he uses as an excuse to ill-treat her some more. She runs away to her brother's property in Louisiana, and when Jason chases her there, he assumes that her brother, Adam, is her new lover, and the baby she's carrying is a bastard she's had to taunt him.

When he finds out the baby is actually his, he gets angry all over again (I sense a pattern here) and uses that as yet another excuse to get angry at Catherine and treat her like garbage. At this point, she basically rolls with all the punches and moans about her broken heart and the fact that Jason will never love her. Ew. Since they're both experts at not fucking telling each other critical information, Jason fails to tell Catherine that Davalos, that guy who was his treasure hunting buddy from the beginning, now has it in for him because he thinks that Jason has the key to the treasure cave.

Davalos kidnaps Catherine after she flounces -yet again - from Jason Savage, rapes her a bit, and indirectly causes her to miscarry her child when, beaten and abused, she flees his camp on horseback. Jason finds her in the depths of agony and sends Blood Drinker to find, capture, mutilate, torture, and castrate Davalos, before leaving him in the desert to die. Once the deed is done, Jason informs Catherine, who is still suffering from PTSD, that the best cure for rape is marital rape, and forces himself on her to help rid her of those traumatic memories. She likes it, and the book ends "happily."

Man, what do I even say about this book? It kind of reads like an off-brand SWEET SAVAGE LOVE. That book also had a POS hero who liked to slut his way around the globe, but the heroine gave as good as she got and didn't spend the whole book crying and whining and basically embracing victimhood like it was the most romantic gesture she'd ever seen (cringe). The surprisingly graphic torture scene at the end was also unwelcome, because most of the story was pretty dull (apart from the rapes, which are basically a given in romances written during this time period). I think the last time I saw something so graphic in a romance novel, it was in Parris Afton Bonds's DUST DEVIL.

I did not really enjoy GYPSY LADY that much and I don't think I'd recommend it to anyone but the most hardcore readers of the old skool bodice ripper experience. I didn't feel the connection between the hero and heroine and he never groveled or suffered for his actions at all. Torturing one of his fellow rapists as a grand gesture didn't really do it for me. And the heroine lost all of her spirit and pluck as soon as the hero walked onto the scene and started making her body feel traitorous. Nope.