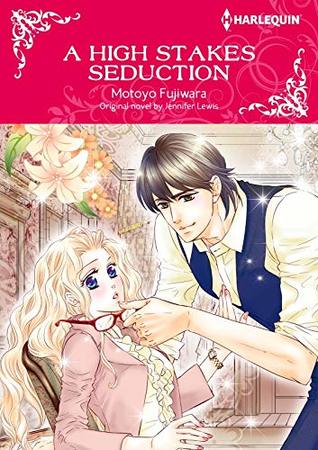 You know, I'm not sure why Netgalley keeps denying me for these Harlequin manga titles. Don't they know that I am the Queen of Trash? Last time I applied for a bunch and only got one. This time, I lucked out - I got three. One of those titles was A HIGH STAKES SEDUCTION, originally based on a novel by Jennifer Lewis and adapted into manga format by Motoyo Fujiwara, who also did MARRIAGE ON THE REBOUND.

A HIGH STAKES SEDUCTION is about a forensic accountant named Constance who is charged with investigating a casino for fraud. The casino is owned by a man named John Fairweather, who is part of a seemingly fictional tribe of Native Americans called the "Nissequot." She is attracted to him, despite the fact that she cannot have anything to do with him, but when a fire leaves her without rooms, John, who happens to be a volunteer fireman, arrives on the scene and insists that she stay at his hotel. Constance agrees, because conflict of interest? What's that? Lollerskates, must be a synonym for room service.

Unethical behaviors aside, Constance does do her job, and she does it so well that she discovers John's uncle Don hasn't been reporting his gambling earnings to the IRS. While this is not an example of corporate fraud, it's enough to launch an investigation into the casino. She does this after she and John sleep together, and she overhears Don making a sly remark that if Constance is infatuated with him, she might let them skirt the rules and get off without an investigation. Kudos to the girl for doing her job, but points from Gryffindor for making it about being a lover spurned. #professionalism

I liked the art in this book a lot and it was great to see a heroine with glasses, even if there were several iconic "wow, without the glasses she's totally hot now!" moments. I also appreciated seeing a heroine who was handy with numbers and praised for her brilliance. The hero was also a pretty nice guy, much less ruthless than rumors made him out to be. I'm a fan of psychotic alpha heroes, but once in a while it's nice to have a break from Psychoville and go to the island paradise of Beta Hero.

I must say, I don't see the need for the author to invent a fictional Native American tribe when there are so many real tribes she could have given representation to with a little bit of research. This is like when authors write sheikh romances and set them in made-up Middle Eastern countries. I wonder whether this is due to a fear of causing offense or a laziness in doing research (or maybe a mixture of both). While I understand the reasoning behind it, making up fake tribes and fake countries and attaching to them the cultural histories and trimmings of real people and real cultures smacks of cultural appropriation. Do the research. Write about the real people. Don't fudge the facts. #my2cents

Overall, though, A HIGH STAKES SEDUCTION was a decent adaptation of a romance with an interesting storyline, nice art, and a decent hero and heroine. Motoyo Fujiwara is on her way to becoming one of my favorite Harlequin mangaka. I just wish HQ would stop being so stingy with their ARCs and give me all of the ones I ask for. I'm greedy, I know, but... but... manga. They're so addictive. I swear, they're like the Pringles of romance novels. You can't stop at just one (or three).