The Poison Master by Liz Williams 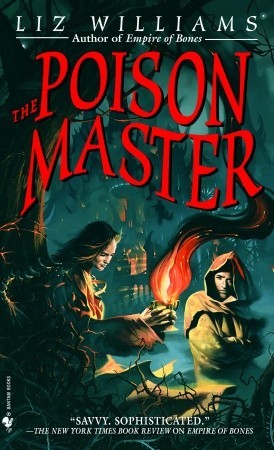 I finally found an author who rivals Tanith Lee and R. Lee Smith in terms of dark, original world-building; resourceful heroines; and creepy, dark heroes who don't fit in the typical alpha/beta/gamma mold. THE POISON MASTER was amazing, and I don't use that word lightly. I've read a lot of books, which makes it even more of an event when I find something that is really out of the ordinary.

THE POISON MASTER is a science-fiction novel with fantasy elements set on a faraway planet called "Latent Emanation." It is a planet of ice and swamps and darkness, ruled over by insect-like lords who reside in the Night Palace and use corrupt and brain-washed humans called Unpriests to subjugate the human populace.

Alivet, the heroine, is one of these subjugated humans. She works as an apothecary, which is considered a woman's profession due to its similarity to cooking. She provides recreational drugs to the wealthy humans on the planet, many of whom use hallucinogens in tandem with sex to while away the time. One day, one of the drugs reacts badly with a client and Alivet finds herself wanted for murder.

Her savior comes in the form of a red-eyed, dark-haired stranger who Heather was totally right to describe as Vincent Valentine in her review, since that's totally how I was imagining him too (hot). He offers to help her but at a cost - he wants her help destroying the Lords of Latent Emanation. Her drug-making skills are of use to him because he's looking for a substance that will kill the Lords, and capitalize on their light sensitivity that forces them into hiding in the shadows of their palace.

As I said before, I loved the world-building in this book. It was interesting how the poisons were so psychedelic, and how Alivet (and others) could communicate with the "spirits" of the hallucinogenic substances. The poison-making scenes were really well done, and it was great to see a heroine who was so competent and passionate about her work; I feel like it adds to a story when you have a heroine who exists beyond the romantic role she plays for the hero. There's a bit of romance in this book but it isn't really the focus of the story; the sexual tension is just a nice addition to the danger.

I saw another review complaining about the age difference between Alivet and the hero, Ghairen. She's an older teenage (17 or 18 I think? maybe 19?) and he's 40. But Ghairen is a different species from Alivet, and his race lives to be about 200 years old, so in his race's life span, he's not that much older than Alivet. That made the age difference a little less weird for me.

THE POISON MASTER is very dark and has some gruesome themes. I really, really enjoyed it - it reminded me a bit of Labyrinth, as Alivet is trying to save her sister from the Lords and the Unpriests, even as she seeks to destroy the Lords and figure out what Ghairen's intentions with her are. There are historical passages from Elizabethan times interposed between Alivet's narrations that are about one of her ancestors, John Dee, a man who brought the Lords upon the humans and opened up the pathways between Earth and other worlds. These passages are strange but grew on me.

If you're looking for something different and enjoy dark fantasy and science-fiction, THE POISON MASTER is a solid choice. I enjoyed the high stakes heroine's journey, the emphasis on poison, the strong female protagonist, the dark love story, and pretty much everything else. She even referenced one of her other books in here, talking about world-souls! I'd definitely read more from this author.