The Night Tiger by Yangsze Choo 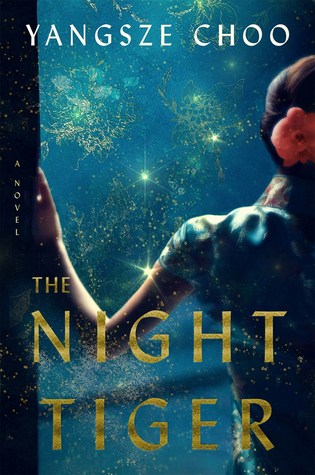 THE NIGHT TIGER was an OK read. There were some things about this book that I really enjoyed, and other things I didn't. The book is set in 1930s Malaya (Malaysia), when it was still under British rule. There are two main characters: Ren, an 11-year-old houseboy to British doctor William Acton, and Ji Lin, a dressmaker moonlighting as a dance hall girl. Their stories end up interconnecting due to a severed finger in a vial that Ji Lin obtains from one of her clients. The finger belongs to Ren's old master, and he has only 49 days to get the finger back to his master's grave before his soul is lost forever. At the same time, the women that William Acton fraternizes with keep turning up missing, dead, or both, often looking as though they were mauled by a tiger, and Ji Lin keeps having strange dreams about a river and a train, with a boy who tells her about five people whose names resemble the five Confucian values, and a terrible curse...

So what did I like about this book? It has the creepy, murder plot of a BBC murder mystery. I like how the murders were steeped in Chinese mythology and magic realism, and the looming specters of the weretiger, as well as the finger in the vial, were both suitably creepy. I didn't guess who (or what) was responsible until the very end, so there was a very nice series of reveals to make me feel as if the journey had been worth it. That's important in a murder mystery novel, I think you'll agree. Ji Lin was a great character and I liked that she had a job that was looked down on as being morally loose, and that she didn't tolerate any shit-talking from people about her career. Ren took longer for me to like, and I'm not sure I bought his "cat whiskers" premonitions. That was really strange.

So what didn't I like about this book? Good Lord, it was long, and took forever to get to the damn point. The first 100 pages or so were a breeze, and I thought I wouldn't be able to put the book down. Then the book started to drag a lot without revealing a whole lot of new information. While I did like Ji Lin's eventual love interest, that whole subplot was also dragged out for what seemed like emotional tension, and kind of felt like another excuse to pad the already bloated plot. I also felt like the ending was simultaneously too neat while failing to wrap up a few loose ends. I know on the surface that sounds like it doesn't make sense, but THE NIGHT TIGER focuses more on the kismet between the main characters, and yet ignores the rather glaring problem of the other severed fingers in the hospital, as Chelsea pointed out in her review. Do those souls just never get saved? Lame.

THE NIGHT TIGER is an interesting book, and I like the author's style of writing. I bought her other book, THE GHOST BRIDE, relatively recently and I'm hoping it'll be better than this one. I didn't hate THE NIGHT TIGER, but it has all the good ideas/less than optimal execution dichotomies and pacing issues of a debut novel, and since this isn't a debut novel, that isn't good. Still, it's great to see #OwnVoices historical fiction that explores time periods and situations that aren't getting as much representation as, say, Tudor England or British/American-fought WWII, so kudos for that.