This Golden Rapture by Fancy DeWitt 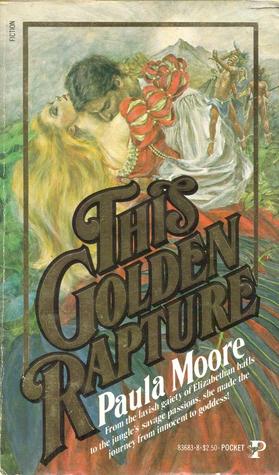 I am a woman of refined and exquisite taste - except when it comes to my taste in books, where I read whatever trash I can get my hands on. THIS GOLDEN RAPTURE is the perfect example of smutty pulp that has been all but forgotten with the passage of time. I happened upon this author randomly while checking out books shelved under the "bodice ripper" tag on Amazon, and was delighted to find that, unlike the vast majority of pulpy bodice rippers, Fancy DeWitt's books were still available in ebook format, presumably in the original edition and without the PC-rewrites authors like Catherine Coulter like to do to make their books more palatable to modern audiences.

This is my second Fancy DeWitt book. The first book, WILD HEARTS, was a rapey Western reminiscent of SWEET SAVAGE LOVE. I enjoyed it, despite some slow portions and OTT scenes. THIS GOLDEN RAPTURE could not be more different. Instead of being set in the 19th century "old west," THIS GOLDEN RAPTURE is set in Tudor England, right around the time that the Catholics and the Protestants were really going to town on one another.

Diane is a busty noblewoman whose father is about to betroth her to a dude whose pockets are probably inversely proportional to the size of his peen, this being the Renaissance when women were chattel and forced to marry old men who could have been their fathers or even their grandfathers in terms of age discrepancy. She is kidnapped by a pirate named Guy Ramsey, previously a nobleman whose house has fallen into disgrace after his father was charged for consorting with the Spanish and loving Catholics and trying to help both get their fingers into some forbidden English pies. Now his father is executed - falsely, Guy claims - and with no recourse, he decides to kidnap an English lady.

Diane is kept on the ship for a while, watching in horror as Guy is made to walk the plank and an evil Spanish grandee terrorizes her with threats of rape while the Basque captain turns his eye the other way and the jealous Basque OW Aimee dreams of petty revenge to make Diane's life miserable. Also on the ship is a South American indiginous woman named Amute, who is there with her father to lead the Spanish sailors aboard the ship to El Dor-fucking-ado.

I thought there was no way this would pan out to anything - until I read the summary of the book on Goodreads. They make it to El Dorado, the Spanish people betray Amute and her father when their greed gets the better of them, and decide to go after their people with guns and cannons. Meanwhile, Diane becomes a goddess who is about to get married to the Native prince, only Guy is there to beat the prince to the wedding night, which involves pre-gaming it with an underage girl, for some reason.

The book ends with an exploding ship and Guy and Diane sailing off to their happy ending, and of course his honor is restored when it's revealed that the man Diane's father would have married her off to was actually the traitor who was helping the Spanish this whole time. This book was even crazier than WILD HEARTS, with Guy being psychic (he learned from Indian - that's Indian as in actually from India - wise men); ridiculous scenes that make this feel like an X-rated version of The Road to El Dorado, and woman-on-woman erotic oil massages because, as my Goodreads friends put it when I posted this as a status update, what else are you going to do aboard a pirate ship? Point taken.

I would recommend reading this book for the lolz alone, but it doesn't really hold up plot-wise the way WILD HEARTS did. WILD HEARTS had an OK plot and told a story I was interested in, whereas I found myself increasingly bored with THIS GOLDEN RAPTURE, reading only for the WTF scenes to see just what crazy shit the author would deliver to give me my money's worth.