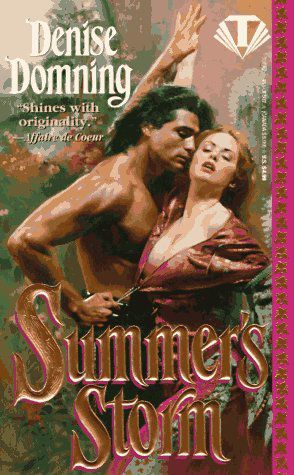 I really wanted to like this one because the recommendation for this book actually came to me from my mom. Denise Domning writes historical mysteries, in addition to historical romances, and my mom read the mysteries when they were on sale and really liked them. When she saw that the author had bodice-rippers on her backlist, she naturally thought of me, and luckily for me, on the day my mom was telling me about this author, one of her books was free! Unfortunately, it wasn't the one that looked the spiciest, WINTER'S HEAT, but this one looked good, too. I was a little leery that it was a Topaz publication, as those tend to be heavy in 90s-bodice-rippers and super fluffy/cheesy, but I took a chance.

The premise is actually really good. Philippa is the bastard daughter of nobility. She lives with her abusive husband and abusive mother-in-law. One day, a 'knight' and his lord come to their impoverished castle, and she finds out that her husband is involved in a lawsuit against her half-sister, Rowena, from the previous book, which is contesting her inheritance. She's brought to her sister who is initially displeased to see her, until she finds out that this is all a big scam on Philippa's husband's part to get more money.

Meanwhile, the 'knight' is not actually a knight but the bastard half-brother of the man that Rowena married (also from the previous book), Rannulf. His name is Temric and he has refused knighthood for reasons I forgot... but anyway, Philippa is off-limits to him, which is a shame because her vulnerable, delicate nature makes him want to protect her. Then there's also the whole unfortunate thing about in-laws being considered blood relatives, so being with his sis-in-law = medieval incest. Seems fake, but OK. He's about as good at resisting his attraction as a colander is at holding water.

This was just too fluffy and ridiculous for me to like. I didn't like all the flowery language or that the plot takes forever to get moving. I liked how Domning tried to introduce the concept of domestic abuse in Medieval times in a real way, but Philippa was such a dull heroine and Temric was pure generic good and I didn't really root for them or feel invested in their futures because they read as cardboard cut-outs of characters without any real panache or personality.

Basically, this was the epitome of everything I find it hard to like about 90s bodice-rippers. Sorry, mom.