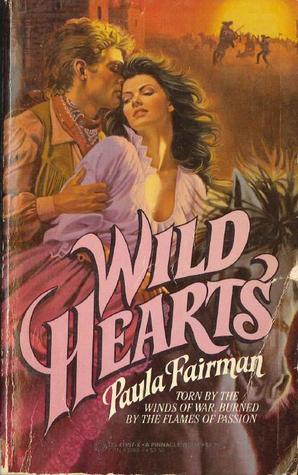 WILD HEARTS is one of those crazy bodice-rippers that doesn't know the meaning of politically correct. The heroine, Camilla, lives with her mother and young siblings on their Louisiana plantation. One day, a business partner of their father's drops by and announces smugly that her father is presumed to be dead and unless they can prove that he's alive in six months, all their property goes to him. Although -wink-, he'd be willing not to kick them off their land if Camilla decided to marry his greasy, money-grubbing ass.

Tossing off a quick "hell no" to that, Camilla decides to dress up in drag and journey out to Texas to look for her dad and drag him back home. Her secret is spoiled when a gunslinger-type named Abel accidentally-on-purpose spies on her as she bathes. She wants him to be her guide, but he refuses, and gives her a kiss instead before saying that she should be on her way. Unfortunately, she gets kidnapped by a man named Lopez, cousin to General Santa Ana.

Lopez threatens her with rape, does some nonconsensual petting, mocks her for wanting him, and then waltzes out with a "girl, you wish I'd let you have the D." Then Abel busts in and rescues her, only to discover her sans clothes and feel manly insult that the damsel he just rescued is not a virgin. Since she happens to be on a bed, he decides to take advantage of her, and for some reason she decides that this is awesomesauce. They end up having sex several more times, although of course Abel tells her he doesn't want to get married.

It turns out that Camilla's father is a soldier in the Alamo. (Remember the Alamo?) Convenient, since Abel needs to deliver a message for Bowie, and Camilla knows what he looks like since he's a friend of her father's. They run into a fake impostor Bowie, Abel gets wounded, Camilla gets him drunk by feeding him 3/4 of a bottle of whiskey before heading out to the Alamo herself to deliver the message. She hears fake news that he's dead and is sad, but marries a man old enough to be her father named Ben Archer. Meanwhile, Abel feels betrayed by Camilla, because she reminded him of his late Mexican wife, Carlotta, who was raped and murdered by three cutthroat criminals.

Those same three cutthroat criminals are also at the Alamo, and eventually Abel realizes through the gossip grapevine that he has the chance for both revenge and sexings, all in the same venue. He races over and runs into Lopez, who grants him mercy and will let him get revenge, mostly because Lopez also lusts after Camilla as well. More stuff happens, Santa Anna turns out to be a pedophile, an opium addict, and a coward, and his unsuccessful attempt to flee after the battle of San Jacinto ends up making Texas a state. Camilla and Abel end up with an HEA and the farm is saved, woo-hoo.

Honestly, WILD HEARTS kind of reads like a racier WILD TEXAS FLAME or a much milder SWEET SAVAGE LOVE. Abel McCord definitely comes from the "I chew on cigars and shit scorpions" school of manliness, like he spent his adolescence watching one too many Clint Eastwood movies. The only other review for this book complains about the sexual nature of this book and I do get that. For a bodice-ripper, this had an outrageous amount of sex scenes (most of them aren't this smutty), and a good portion of those were consensual in only the most imaginative sense. I almost got a LOVE'S TENDER FURY vibe from this book, which was written by Jennifer Wilde (pen name for a male romance author), and I definitely wondered if maybe DeWitt was a male romance author, too. The heroine's very strange reaction to rape and the male gaze-focused sex scenes (boobz!!) were a bit eyebrow-raising. Also, not a single mention of the hero's washboard abs. What? I feel cheated!

I got bored of the sex scenes after a while, but the fight scenes and battle scenes were excellent and there was a surprising amount of action packed into this rather short book. I have a couple more of DeWitt's books on my Kindle and I'll definitely be checking those out. If you're into bodice rippers and like authors like Jennifer Wilde or Rosemary Rogers, you'll probably enjoy DeWitt's works, too.