The One She Was Warned About by Shoma Narayanan 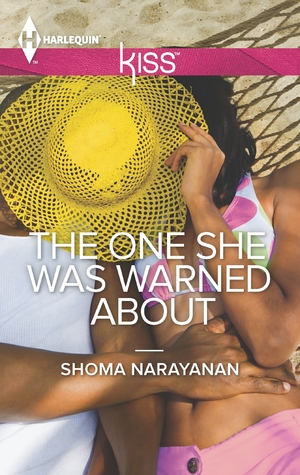 💙 I read this for the Unapologetic Romance Readers' New Years 2018 Reading Challenge, for the category of: #OwnVoices Romance. For more info on this challenge, click here. 💙

A few years ago, I took a look at my romance shelves and was forced to confront a pretty ugly reality check: 99% of the romance novels I was reading were about straight, white characters. I made a conscious decision to seek out romances that featured leads of color, and the end result meant that when I needed to find an #OwnVoices romance for a reading challenge, I had about 25+ choices on my Kindle instead of a mere one or two.

THE ONE SHE WAS WARNED ABOUT is a romance set in India between two people who have known each other since childhood. Shweta is a conservative woman who grew up dorky with giant glasses and has a reputation for being a goody two-shoes. Nikhil had a bad-boy reputation and had to endure rumors and cruel jokes about being illegitimate because his father had a mistress as well as a wife. Now, he's a successful businessman who works with celebrities. The two of them have a chance encounter at a restaurant, and when Nikhil sees how pretty that Shweta has become, his nostalgia blossoms into attraction.

I feel like I learned a lot about dating in India from reading this book and how sexuality is treated, especially in woman, and the double-standards between men and women. It was interesting to see Shweta struggle to reconcile her desires to be a modern woman who felt comfortable expressing intimacy with the man she was attracted to with what she learned from her own strict upbringing. Likewise, the indulgent way that Nikhil's step-mother broaches his womanizing is a disturbing echo of the way that she describes her own rape as a man who "misbehaved" with her. Shweta also slut-shamed her friend, Priya, ruthlessly, even going so far as to blackmail her friend into doing what she wanted by threatening to tell Priya's (also apparently strict) parents about her boyfriend.

I think I actually enjoyed reading about dating in India more than I enjoyed the romance playing out between the characters themselves. Nikhil was fine - reformed playboy doesn't really do it for me, although it was clear that the dude thought he was smooth with a capital "S" - but Shweta really annoyed me. She was constantly throwing tantrums and berating the people around her and even acting violently, with punches! I was not a fan. I can't stand immature, bratty heroines.

This is actually my first Harlequin Kiss book, and I'm guessing that they probably call them that because they are light, sweet, and over quickly. I like the idea behind it, and even if I wish that I'd enjoyed THE ONE SHE WAS WARNED ABOUT more than I did, I'm definitely interested in pursuing more books from this line, as well as more books from the author herself.

If you're curious, you should give this book a whirl. It's currently only 99-cents.