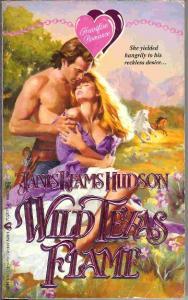 💙 I read this for the Unapologetic Romance Readers' New Years 2018 Reading Challenge, for the category of: Cowboy/Western Romance. For more info on this challenge, click here. 💙

This was a buddy read with my fellow Unicorn Equestrian™, Heather.

Curse you, Janet Reams Hudson! Between you and Danelle Harmon, I'm almost starting to like 90s bodice rippers, and I absolutely cannot have that. Stop appealing to my trashy, trashy heart, you ferocious writers of aggressively endearing content! Curse you! CURSE YOU!

I picked up WILD TEXAS FLAME when it was free in the Kindle store, which is how I feel a lot of these Kindle Cleanout Club stories go. You pick a book up because it was either cheap as dirt or free as air, and it chills out on your Kindle for years until you just happen to notice it one day and think to yourself, "What is this? Why do I own this? What was I thinking?"

I needed a western romance to fulfill a category on this reading challenge I'm doing, and since my friend and I both happened to have the book (snagged during the same freebie promo), we decided to do a buddy-read of WILD TEXAS FLAME. But then I got busy, and then I got sick, so she ended up finishing it way before I did. However, she enjoyed it! Which gave me hope that it was good trash!

WILD TEXAS FLAME is the story of a woman named Sunny Thornton who lives with her three younger sisters and her dad at a ranch in Texas, a few decades after the Civil War. The Mayor, Ian Baxter, is throwing his weight around, trying to call in a loan that her father took out. If her father can't pay, he's going to take their ranch. On a trip to go to the bank to straighten everything out, they have the bad luck of running into bandits who are in the process of robbing the bank. Sunny's father is killed before her eyes and she's saved from the same fate only when a man named Ash McCord tackles her to the ground, taking the bullet that would have otherwise been meant for her.

Ash McCord just got out of jail for several years after shooting Ian Baxter in the back. He claims he has his reasons, but nobody he told his story to ever believed his innocence - except for the woman who runs the boarding house, Ella. The bullet he took for Sunny hit his spine, causing paralysis, which could be permanent or temporary, nobody is sure. Sunny feels guilty, and also sees a kindness in him that is hidden by his gruff exterior, so she takes him into her home and oversees his recovery.

I'm a sucker for nursing-the-hero(ine) back to health tropes, and it's done particularly well here. I also really liked the heroine's relationship with her family, especially since family members are often shunted aside in romance stories; I feel like they feel much more realistic and healthy when the focus is on the relationships that both the h and the H have with other people, and not just one another.

The heroine also isn't totally naive about sex, which is probably pretty realistic considering that she lives on a ranch that breeds cows. Even if she wasn't having any, she'd see it done, and wouldn't be a stranger to the idea. I read a lot of 70s bodice rippers about traitorous bodies, so I have to say, it was pretty refreshing to see a heroine taking charge and the hero whining about his traitorous body for a change! Way to turn the tables on that whole equation.

This story could have been too saccharine, but a murder subplot weaves through the narrative, along with other juicy plot points, like betrayal, debt, and secret fortunes. It kept the story tight and focused, and gave WILD TEXAS FLAME a driving base that had me turning pages to see what would happen next. I was expecting an epic showdown with the villain, and I was not disappointed.

WILD TEXAS FLAME is a bit light and frothy, but beneath the froth, there is also substance. If you, like me, believe yourself to be a hater of 90s-era bodice-rippers, you should check out this book as well as some of Danelle Harmon's. I have this author's other book, APACHE MAGIC, on my Kindle as well, and while I side-eyed the title before, I think I'm much more favorably inclined to read it now. This was a good, solid read.