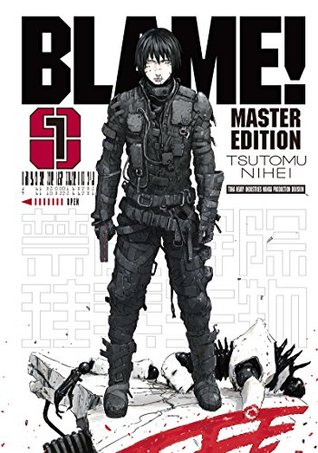 I just read the new Cardcaptor Sakura book and this manga could not have been a harder contrast to that if it tried. Cardcaptor is a shoujo manga intended for young girls and Blame! is a seinen manga intended for older guys. It contains not a single dash of cuteness or romance or magic; instead it is a grim post-apocalyptic, like J.G. Ballard's HIGH RISE, as populated by genetically mutated cyborgs that are something like The Matrix as done by the creators of Silent Hill, with a hero's journey straight out of Birdy the Mighty.

This is one of the longer graphic novels I've read, clocking in at just over 400 pages (which I guess is what makes it the "Master Edition") but it goes by really quickly because there isn't a lot of text. Most of the pages are just illustrations of the terrifying megalith where all of these characters live, in all of its monstrous, cyberpunk glory. The details of the architecture truly are incredible and is probably BLAME!'s biggest strength.

Kyrii is a human who is searching for something called "The Net Terminal Gene" which is what causes some humans to see retinal displays and interact with the "The Adminstration"; the dystopian overlord robots of this world. Along the way, he encounters a number of beings, spanning the whole continuum of robot and human, although the scientist mentioned in the Goodreads summary who seems like she'd be an integral part of the story doesn't make an appearance until the very end.

I thought this book was more interesting than good. The world building is confusing. All of the characters are in the dark about their origins, so you get a sort of CANTICLE FOR LEIBOWITZ thing going on, but that, paired with the lack of dialogue, kind of gives this story a dull, claustrophobic feel. By the end of the book, I didn't really feel like I knew Kyrii any better than I did in the beginning of the story. I know the summary says that he's stoic, but there's stoic and then there's a block of wood, and Kyrii resembles the latter way more than the former.

I guess I've read too many similar stories to this one that took a concept like this and did it one better. If the sequel goes up on Netgalley, I may apply for that to see if this story is worth pursuing, but the cyberpunk constructs and blood splatter seem to be this story's two main claims to fame, and I'm not particularly into either one of those things, so it might just be a case of it's-me-not-you.