The Claiming of Sleeping Beauty by Anne Rice 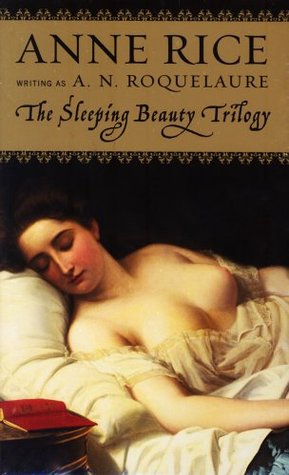 💙 I read this for the Unapologetic Romance Readers' New Years 2018 Reading Challenge, for the category of: Fairytale Retelling Romance. For more info on this challenge, click here. 💙

When I was a preteen, I was out with my mom having brunch or something, and I remember these two ladies sitting nearby trying reaaaalllly hard to speak quietly, so all I could really make out was "Pssst....did you hear about...psst-psst...Anne Rice...psst-psst...erotica...pssst-psst-psst...sleeping beauty...pssst...bondage." Then they noticed that I was there and doing whatever the middle school kid equivalent of a dog staring at you with one ear lifted is, and started talking about something way less interesting.

My adolescent trash senses were tingling, but this was before the internet was really an every day thing, so I put that convo on ice and years later, as an older teen on Goodreads casually looking up erotica books to read, I thought to myself, "Hmmm, I wonder what those two secretive ladies were talking about? I'M GONNA SEE IF I CAN FIND IT."

Moral of the story: erotica is NSFB (not safe for brunch).

Also moral of the story: probably not best to discuss such things in front of little pitchers with big ears and semi-eidetic memories (not that they could possibly know that - but hey, if you ladies happen to be following me now, please consider this review personally dedicated to you, mwah)

I'm not even going to try to pretend that Amazon is going to let me get away with this posting this review to their site, so this is going to be one of those (rare) instances where I'm not going to self-censor. I'm sure somebody has managed to come up with a PG-rated review of this book, and I'm equally sure that review doesn't mention the people staked out in the gardens with sugar syrup smeared on their genitals and insects biting their flesh as "punishment," or the people being literally pushed around on the floor by their masters by giant butt-dildos on sticks. These are crucial bits of info that I feel the public should know prior to purchase.

I'm also not a sadist. The concept of sadism in and of itself frankly repulses me a little. I get that some people are into that, and if you find someone who would like to do that stuff with you and there's consent and that's your jam, then whatever, but I find it totally off-putting and do not enjoy reading about it. Especially when there is NOT consent. And not only is there sadism in this book, none of it is consenting. So that's doubly not fun for me.

The premise of this book is really strange. Only the first chapter really follows the fairytale. The prince finds Sleeping Beauty, rapes her, and then announces to her family that he's taking her as Tribute. Apparently his kingdom is notorious for this: they get attractive princes and princesses from other kingdoms to keep as slaves as "tithes." Which begs the question: why is everyone going along with this? They seem so busy investing their treasury in things like gold ben-wa balls, bejeweled fisting gloves, and silver paddles that I can't see them investing in things like a militia, so what's to stop one of those neighboring kingdoms from being all, "Hey, no, you know what? Fuck this, I see your paddle and raise you eight hundred gentlemen on horseback armed with rifles and cannons."

Beauty is subjected to multiple humiliations: paraded about naked, where she's molested by total strangers, raped again by the prince, spanked, spanked, spanked, and yes, spanked some more, paraded about in front of all the courtiers (naked) while bound and being humiliated and spanked and also yes groped and molested some more, then she's taken outdoors and given pony shoes and spanked up and down the gardens, then she's foisted off to the prince's mother to be sexually assaulted and spanked some more, and on top of this she's fed wine and food on the floor like a dog and is only allowed to dress and undress people with her mouth, and at the very end of the book she finally gets to sleep with the one guy she actually likes - a fellow slave - and the book ends with his recollections of his punishments which include, but are not limited to, being anally raped with a whip, having numerous ben-wa balls shoved up his butt which he is then instructed to poop out, being thrown in rotting garbage while being molested, groped, etc, and oh, yes, constant spankings and rape. (FYI: Breasts are spanked, butts are spanked, dicks are spanked, vaginas are spanked, et al.)

This really is the poor man's Marquis de Sade, because as much as I freaking hate de Sade, he did it first (or at least, most famously) and he shocked the hell out of everyone. Anne Rice tries to do the same, but it's mostly just gross and depressing and sad. Beauty spends most of the book in tears, and the people around her just bully her so ruthlessly, telling her that she deserves her punishments, but also that she'll be punished when she doesn't deserve it because they enjoy punishment, threatening her constantly but then praising her beauty and saying how good she is - this book shouldn't be called THE CLAIMING OF SLEEPING BEAUTY, no; it should be called THE GASLIGHTING OF SLEEPING BEAUTY. The entire book is literally all of these fucked up people telling her that they are making her better, that they are helping her, that they are giving her what she deserves.

If it were me, I'd be like, BITCH. GIVE ME THAT PADDLE. I'M GOING TO BEAT YOUR HEAD WITH IT. (But then, if I were a character in this book, I'd totally be one of those people saying, "Um, yeah, they're so busy doing all that crazy stuff right now, maybe we should bring in our military to free those people they are CLEARLY keeping as prisoners of war and not humanely, either!")

The writing isn't so great, either. The word "little" is used every other page, it feels like, and the descriptions of sex themselves are kind of nauseating.

Beauty's breath became uneven, and she felt the moisture between her legs as though a grape had been squeezed there (146).

Leon's quick, graceful fingers had probed her navel, then smoothed into it a paste in which he set a glittering brooch, a fine jewel surrounded by pearls. Beauty had gasped. She felt as if someone were pressing her there, trying to enter her, as if her navel had become a vagina (117).

...with his left hand felt the soft hairy little pelt between Beauty's legs... (17)

...he suckled her breasts almost idly as though taking little drinks from them (17)

Now that I think about it, KUSHIEL'S DART and CAPTIVE PRINCE both had very similar premises to this book (fantasy kingdoms whose courts/culture revolve around BDSM-like goings-on), to the point where I can't help but feel that they were probably indirectly inspired by THE CLAIMING at the very least. The difference is that both those books actually made an attempt at world-building and character-building, and there was some court intrigue beyond "OH NO! TWO PEOPLE WANT TO SPANK ME TONIGHT - WHO WILL GET TO WIELD THE PADDLE?" I actually liked CAPTIVE PRINCE.

Somebody with the ebook version seriously needs to do a word count of how many times "little" was used in this book. I feel like it was probably 100+ times, it was so noticeable.

I can't believe there are 3 more books in this series.