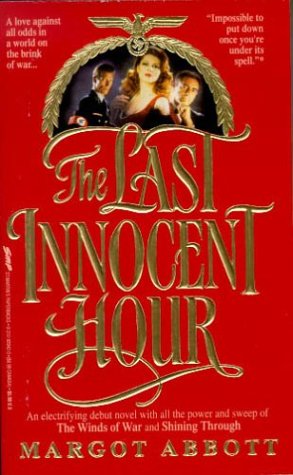 💙 I read this for the Unapologetic Romance Readers' New Years 2018 Reading Challenge, for the category of: Military Romance. For more info on this challenge, click here. 💙

THE LAST INNOCENT HOUR is a WWII-era romance loosely inspired by an entry in the journals of the U.S. ambassador to Germany during the 1930s, William Edward Dodd, as edited by his daughter, Martha Dodd. In the journals, an SS agent who was an aquaintance of the family apparently broke down, sobbing, on their sofa. Margot Abbott asked herself what could possibly happen to a hardened soldier for that to happen and wrote a story around that.

The story is told in the best way to rip out your heart. It starts out impersonally, in the removed third-person narrative. Sally, now in her late twenties/early thirties, is an intelligence officer investigating war crimes perpetuated by the Nazi party during WWII. She has a particular knack for identifying faces in photographs, so she looks at photo after photo of all these atrocities, trying to put names to faces, names to uniforms. It's a terrible job, made even more terrible by the fact that she recognizes her ex-husband in one of the photos.

At this point, we don't know much about Sally, apart from the fact that she's obviously haunted by some terrible tragedy in her past, and probably has untreated PTSD. We also know that her feelings about her ex-husband are all tangled up in this mysterious tragedy - part of her wants revenge, and wants to see him hang for the horrors he's wrought upon the world, but part of her remembers the boy he was during their idealistic childhood, and the man he became who she fell in love with.

1/3 of the way through the book, the narrative style switches to first person as Sally recounts her story firsthand, and the reader is dragged headlong into Sally's narrative, up close and personal. We see her as a child, and see her close relationship with the Mayr family and her innocent love for Christian as a young man. She leaves Germany for a while, to return to the U.S., and arrives back just before WWII, when the fascist party is just beginning to catch on in Germany. Christian is now an SS agent, working under Reinhard Heydrich. Naively, Sally becomes a friend to Heydrich, forming an uncertain bond over fencing and music, and he is the vehicle by which the two of them reunite.

It's difficult to say what happens next without spoilers, but let's just say that THE LAST INNOCENT HOUR is not a book that shirks from wartime horrors or the terrible things that people are sometimes forced to do in order to survive. Two comparable romances in terms of emotional devastation and scope are OUTLANDER and THE BRONZE HORSEMAN. The dread and anxiety that hangs over this book like a toxic cloud is just exceptionally well done, and even though it's a very long book, the pages whizzed by once I actually had time to sit down and read through it. The first 60% might have taken a month to read because of my other commitments, but today I sat my butt down and finished the last 40% in a single sitting, stopping only to eat, drink, and use the restroom. There's a fencing scene towards the end that is just absolutely haunting - it's the type of scene that will stay with you.

And the villain of this book! My God, what a villain. I'm truly horrified.

I had heard about THE LAST INNOCENT HOUR through the usual bodice ripper circles, and despaired of getting my hands on a copy, but it was recently rereleased for Kindle and I was able to pick it up while it was on sale for $2.99. I'm so glad I bought this book. The heroine is the perfect blend of worldly, naive, and intelligent, and even though you know there is no way that this book can possibly end on a truly happy note, Abbott has you rooting for Christian and Sally, despite your better sense. The complexity of the characters in this book was just incredible. I'm blown away.

What a shame that this truly gifted author never published anything else...