The Eden Passion by Marilyn Harris 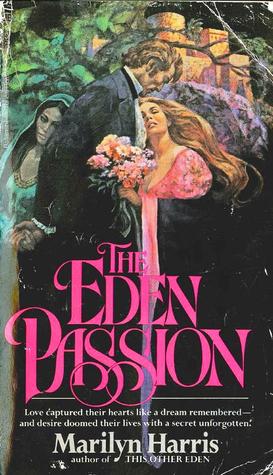 💙 I read this for the Unapologetic Romance Readers' New Years 2018 Reading Challenge, for the category of: Gothic Romance. For more info on this challenge, click here. 💙

THE EDEN PASSION is a literary Dementor: it will suck all of the joy out of your life, leaving you feeling empty and desolate inside. I thought, after reading the two previous books in the serious, that I was adequately prepared for the emotional despair of THE EDEN PASSION, but I was sorely mistaken. THIS OTHER EDEN is a dark, Gothic bodice ripper with a few horrific scenes peppered along to spice up the obsessive love story, and THE PRINCE OF EDEN is a tale of doomed love set amidst a backdrop of petty rivalries and greed for land in the vein of Philippa Gregory's Wideacre trilogy.

THE EDEN PASSION is a different beast entirely.

There are three parts to this novel, which I'm going to describe as parts I, II, and II in the breakdown to follow. Oh, and for the record, this book isn't a standalone. You need to read the first two books in the series, not just for characters and important background information, but also because each book builds off the former, and sometimes you can't appreciate the gloomy doom and horror properly if you don't have the information provided in the previous books. You will have a nebulous sense that something is wrong, and you might suspect, but you won't know why, with that same level of sinking, open-mouthed horror that you would have if you read the other books.

PART I of the book literally opens with the last chapter of book 2, THE PRINCE OF EDEN. After his father's death, John comes to Eden, broken and bedeviled. The occupants are shocked, obviously, not just because his return is unwelcome (it is), but also because he's the spitting image of his father, Edward, who caused quite a scandal with his affair with his brother's wife, and his rather casual selling of Eden-owned land to fund his schools for the poor and underprivileged in London. At first, he is treated as a servant and forced to shovel manure, pending the authenticity of his claim to Eden ancestry, but Harriet Eden, the current lady Eden, has a change-of-heart, and invites him into the castle. Her motives aren't exactly pure, though, and John's entrance to the castle sparks a dark retelling of Oedipus Rex, in nearly every way, and let me tell you, the author knew what she was doing. She even alludes to it, sneakily, by having one of the children (one of John's half-siblings), refer to Sophocles and one of his plays in the schoolroom. Yeah, I see your game.

When the inevitable tragedy happens, PART II begins. A stunned and traumatized John stumbles from Eden and ends up meeting a manic pixie dreamgirl named Lila, who I'm half-convinced is actually Luna Lovegood in disguise (she's the blonde woman on the original 80s cover). Lila is known for being weird, as she makes up stories and talks to her pet cat, Wolfe, and seems to conceive of herself as being a bit mystical and touched with supernatural powers. John and Lila hit it off, and agree to exchange letters. Meanwhile, John ends up going out to pull himself up like his bootstraps but ends up being enlisted into the Crimean War. After being wounded and recovering in a hospital where Florence Nightingale makes a cameo appearance, he goes to India just in time for the Indian Rebellion of 1857. Another tragedy strikes the Indian woman he meets there, Dhari, also in the form of gruesome mutilation, and he ends up taking both her and her son, Aslam, with him out of guilt. Jeez, at this point, I'm thinking, "Are any of the women in his acquaintance NOT going to have anything bad happen to them? Lila is imprisoned in her room by her overprotective parents and John's foster mother, Elizabeth, is brutally raped and beaten by the villain, King Asshat himself.

Part III brings everything full circle. Elizabeth and John reunite and he forgives her for returning to the Oldest Profession in the World. Dhari smilingly steps back as John marries his new, white wife. King Asshat is whipped and sent home in his carriage in disgrace. All the happy people return to a now impoverished Eden Castle, where the madwoman in the attic awaits their return. It begins as it ends, with John coming home, but both Johns are very different people - for better, or for worse.

THE EDEN PASSION was a really intense read and I actually had to set it aside for a week or two around the 200-page mark because there's a scene of self-mutilation in here that's pretty graphic. Likewise, PART II in India is also pretty hard to swallow. The N-word is bandied around a lot, and the hypocrisy of the Christian missionaries is shown with how they say their prayers even as they take advantage of the locals, and Dhari herself was almost a victim to the practice of Suttee, something the ex-missionary who takes her as he pleases tells the table with relish despite her obvious mortification and shame. The portrayal of British Colonial India is portrayed, naturally, with all of the cultural sensitivity of Indiana Jones and the Temple of Doom. There weren't ninja Kali worshipers with scimitars and questionable buffets of leech-filled snakes and monkey brains on ice, but I feel like those could have just as easily been ideas that Marilyn Harris was keeping on the back-burner. You know, just in case all the surprise incest and character tortures weren't enough. I think the last time I read a bodice-ripper that was so dark and so cruel to the characters inside was when I read Parris Afton Bonds's DUST DEVIL. That was another book that also had me needing to set it down, but unlike THE EDEN PASSION, it petered out in the end once the cruel deed was done.

THE EDEN PASSION is not a bad book. It is definitely my least favorite of the three, though (book 2 was my favorite, but I think the first book had the most poetic writing). The quality of the writing and the complexity of the characters pales somewhat here, and I got the impression that Harris was trying to overcompensate for that with more shocking twists and horrific tortures. There's a real Game of Thrones vibe in this book, where the wars and the relationships play a foil to some truly horrific scenes that appear to be done specifically to horrify and scandalize. I couldn't help but wonder what the public at large made of this book when it came out. Was it banned from certain venues? Or, because it was packaged as a romance, did it just end up becoming a best-kept secret that sat on the check-out racks at local grocery stores like a ticking time-bomb of general wtfery?

I don't know, but if you feel like you're too happy in life and want to take yourself down a few pegs, check out the Eden series and enjoy the greatest ritualistic act of literary suffering since embarking upon the Game of Thrones series. Endeavour publishing has been rerelasing these books for Kindle and you can get a fair number of these previously out-of-print books on the cheap, and they don't appear to be censoring out or rewriting the questionable parts like other rereleases, either.