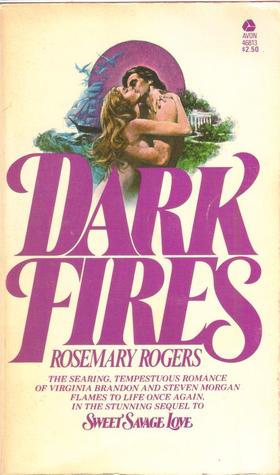 💙 I read this for the Unapologetic Romance Readers' New Years 2018 Reading Challenge, for the category of: Bodice Ripper. For more info on this challenge, click here. 💙

After doing the first book, SWEET SAVAGE LOVE, as a buddy read extravaganza, with Heather and Korey, Korey joined me for a read of the sequel, DARK FIRES. And can I just say that Rosemary Rogers is swiftly becoming one of my favorite bodice ripper authors? Every subgenre has its own reigning queen, and RR is Queen of the Bodice Rippers the way V.C. Andrews was queen of smutty teen fiction.

That said, this is my least favorite book of hers so far.

SWEET SAVAGE LOVE was almost a five star read for me. I loved the nonstop action, the love-hate relationship between the hero and heroine, the lush descriptions of the American West, and of course, Steve Morgan, who could so, so easily be the cover model for one of those pulpy men's adventure magazines that were popular in the mid 20th century. With his cheating, murderous, rapey ways, he is basically the absolute opposite of what I like in romance heroes, but he just oozes raw masculinity. He may be Satan incarnate but I was picturing him as Scott Eastwood.

(Dear Hollywood: if you ever make this series into a TV show/movie, please cast Scott Eastwood.)

The sequel starts out with nauseating marital bliss, but since this is Steve and Ginny we're talking about, it goes from Good Housekeeping to Apocalypse Now pretty quickly, and it starts to feel like Rosemary Rogers is trying to out-WTF herself in the prequel with a plot that involves the following incidents: rape, duels to the death, opium addiction, blackmail, whipping, torture, carpetbagging, typhus-induced amnesia, cheating, more cheating, still more cheating, wtf still more cheating, public affairs, sadists, secret pregnancies, and scalping. Because Rosemary Rogers has a big vocabulary, but "overkill" doesn't appear to be one of them.

My favorite scene was probably the sword fight duel, because I am trash, and occasionally raw displays of masculine douchery work for me. (Especially in puffy shirts whilst aboard pirate ships.) However, I felt pretty frustrated for most of the book because the hero and heroine are separated for huge portions of it and Steve spends it with like 5+ women who aren't Ginny (and I really, really don't like infidelity in romances, especially not wanton infidelity where the hero has no "off" button). Ginny also lost a lot of her spitfire nature that made her so easy to root for in the first book. I guess maybe it was PTSD after all the horrors she endured in the last act, but still: it made me really sad.

I'm kind of curious where the book is going to go from here. These two are pretty much the last people in the world who should be parents, so obviously, that means the sequels should be interesting.