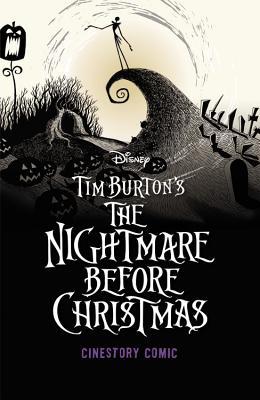 Sometimes people send me books as gifts. This book was a spontaneous gift from my younger sister, along with a Deadpool key chain. Even though I'm pretty choosy about what I will and will not read, I do make exceptions for book gifts because if someone cares enough to send me something they think I'm going to love, I make an extra concentrated effort to read it.

The Nightmare Before Christmas came out when I was a really young kid, and while I liked it, it was a bit too dark and spooky for my taste. It had a revival in the early noughties, because of how well the premise synced up with emo culture. I used to have a Nightmare Before Christmas t-shirt with a split neck that I wore until it faded and stained beyond repair. I think it's a movie you appreciate more as an adult (or a teenager) than as a kid.

Here's why I like The Nightmare Before Christmas. A lot of teenagers who like weird stuff are ostracized by their peers and branded as "freaks." In a way, the people of Halloween Town are kind of like the anime fans and goths; people who don't look and act like other people and prefer darker things. They're not bad people - in their own way, most of them are actually quite kind - but many find them off-putting.

Jack feels a sort of malaise about his role as Pumpkin King. After years of celebrating Halloween, he's grown weary and the spookiness of the holiday has begun to wear on his soul. One day, while playing with his dog, he ends up in the middle of a forest that serves as a gateway to all the other holidays. The Christmas door appeals to him and he opens up and finds himself in the middle of a magical wonderland. The color palette completely changes. It's like when Dorothy opens the door of her cottage and finds herself in the middle of Technicolor Oz. For the first time in a while, Jack feels alive, and thinking this to be the answer to his ennui, he decides to replicate Christmas.

I think The Nightmare Before Christmas is a perfect allegory to teenage angst. Many teenage identities are superficial, and focused on labels and basic concepts, like "jock," "prep," or "outcast," and they think that their worth can be judged in physical, concrete terms like # of followers on social media, how many people find them attractive, or the amount of spending money they have per week. Maybe not all teenagers feel this way, but a lot do (and I'll admit it, I did). Depressed teens often find one or two flaws to focus on, and blame for their emotional state. They think, "If only I could change this one thing about myself, I would be happy..."

Jack decides to change himself and do something that is completely contrary to his nature. His friends humor him, but it's clear they have no idea what they are doing, and their attempt at Christmas is a total disaster. Happiness comes to Jack only when he accepts who he is, and learns that the people who care about him care about him for who he is, weirdness and all. It's a touching story that I think a lot of people (especially teenagers) can relate to, and it speaks to so many relevant teen issues like depression, angst, and wanting to find who you are in the maelstrom of an identity crisis.

This graphic novel seemed like a bit of a cash grab because it's literally just stills from the movie with dialogue pasted over it in comic book bubble format (yes, including songs - eye roll), but I actually really liked it. The photos are high quality and really let you appreciate the detail that went into this stop-motion movie. For example, I never realized before that Jack's dog, Zero, has a glowing nose with a Jack-o'-lantern face. It's so faint, you would never see it unless you paused very carefully. There's a whole bunch of other small, seemingly inconsequential details like that that were super fun.

If you liked the movie, this book is a nice thing to have for the glossy photographs, song lyrics, and fairly thorough recap of the storyline. I never would have picked it out for myself, but reading it made me feel curiously nostalgic for my high school emo self, and as an adult I was able to appreciate the story in a new way for how it reaches out to teens who are a part of the counterculture.