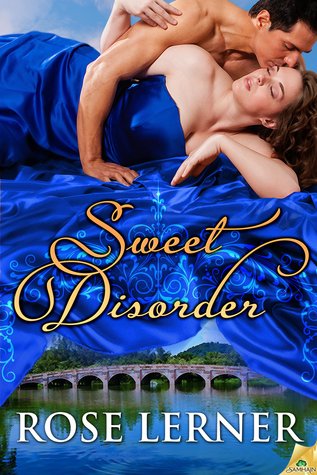 Well, reading this romance novel was a little bittersweet because SWEET DISORDER marks the completion of my 2017 romance reading challenge: or, my personal goal to read 50 different subgenres of romance, many of which I would never pick up otherwise, in an attempt to broaden my horizons.

Phoebe Sparks is a widow who writes and publishers. Nick Dymond is an injured war hero who also happens to be the brother of a local politician named Tony. Nick's family wants to get as many votes as possible for their party, and Phoebe is just the latest target: they want to get her married, so as to ensure another vote. Votes and the feud between Whig and Tory make up a significant portion of this novel, and while it does add background and substance to the story, it can also make it a bit dry at times. I marked this book as "DNF" at least three times before finishing it - it doesn't really pick up until around page 60, or so, when Nick and Phoebe start to find themselves attracted to one another.

What really makes this book is what the secondary characters bring to the table. Nick and Phoebe both have pretty awful families, but they aren't cardboard cut-outs and it's clear that there is love in those families, even if it's showed in a potentially toxic and/or warped way. This is particularly noticeable with the mothers who clearly want the best for their sons, even if they have no idea what "the best" is, or what it might look like from their children's perspectives. I also liked how the siblings came into the story, and how they intersected in a way that I really wasn't expecting.

The non-family characters are good, too. Phoebe goes on "dates" with several potential suitors who might get the Dymonds the votes they need. My favorite was the baker, Mr. Moon, because the descriptions of the pastries and sweets he made sounded fantastic, and he was also a very good and kind-hearted man, and I liked the simpatico that he and Phoebe ultimately achieved, and the way the author described it. There is something wonderful about forming a connection with someone and feeling the instant when it "clicks" - even, perhaps especially, when the "click" is a platonic click.

I'm deducting two stars for the terrible pacing and the unnecessary drama in the last act. Not even some red-hot sex scenes towards the end could keep me from rolling my eyes at the "we mustn't be together after all!" "no, we must!" "no, we mustn't - for our own good!" cliche at the end. Spoiler: this is a romance novel, so they obviously do get together, but it was much more annoying than it needed to be (and unsatisfying - there is a villainous character in here who gets off rather easily).

Overall, SWEET DISORDER is a relatively good book and I didn't have to pay for it (I received a free copy to review in an instafreebie bundle. I think the theme was supposed to be diversity in historical romance, because this book, Sherry Thomas's THE HIDDEN BLADE, and Courtney Milan's TALK SWEETLY TO ME were also in the bundle). Even if I had paid money for this book, I think my rating would be roughly the same (maybe 2.5 instead of 3 - that beginning - oy). It's a romance that takes the time to flesh out more than just the main characters, features a disabled hero and a plus-sized heroine, and discusses topics not often discussed in HR novels, such as the effects and sorrows of war; feeling emasculated or not masculine enough; the toxicity of certain family dynamics and the effects of too much parental pressure; and the stifling English class system.