A Pirate for Christmas by Anna Campbell 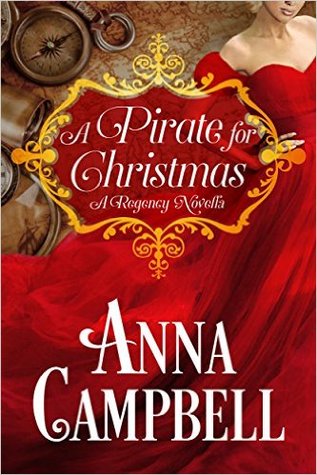 Wow, this was like one of those made-for-TV Christmas specials. One of the bad ones. I've read a number of Campbell's work at this point, and while she made her name writing controversial "nouveau bodice rippers" in the mid-2000s, now she just writes slightly-smuttier-than-the-norm costume regency novels and...this. Whatever this is.

A PIRATE FOR CHRISTMAS is a love story between a vicar's daughter and an Earl, set during the holiday season. There's a donkey, a ton of terrible pirate jokes, and a bunch of kisses that are about as lukewarm as day-old soup.

I skimmed most of this book, but I read enough to get the general idea of the storyline and I just could not get into it at all. It's pure fluff, but without sweetness because there's no real emotional connection. This is the color-by-the-numbers version of fluff.

Plus, I got icky "nice guy" vibes from Rory. Rory, who I was perfectly willing to like because red-haired hero + Navy captain. But no, he decides that he wants in the heroine's knickers at first sight and talks about her like she's prey and he is the mightiest of hunters. Which is permissible if you're writing about creepy men, who you aren't supposed to like, but when Lord Nicey McNicerson of Not-a-Dbagshire is doing it... well, it just kind of rubs you the wrong way.

This was my nomination for my romance group's holiday-themed read for December - and it won. I'm glad I got it off my Kindle, but I also feel kind of bad that so many others had to suffer with me. ;-(