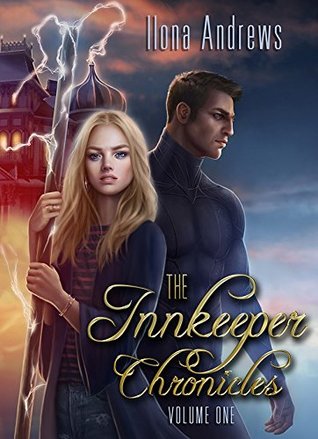 First, I received an advanced copy of this book through Netgalley. I reviewed each volume individually, but they were given to me as a whole in exchange for a fair and honest review. And you know me, guys - I'm always honest. To a fault, some might say (especially if said some was someone who was on the receiving end of a negative review I wrote).

Second, I love that the title of this book says "VOLUME 1." The fact that the publishers clarified that suggests a volume 2. It also suggests a certain amount of hubris, which makes me happy: I love Team Andrews, so it's awesome to see that they're confident enough (and their publisher is confident enough) in their abilities that they're paving the way for more and more future Team Andrews works.

This was probably my favorite book in the trilogy. It was new and exciting and paved the way for the series in such a way that the possibilities seemed virtually imminent. I was expecting UF/PNR, so you could color me shocked when the book took a definite sci-fi turn instead. Pacing was excellent, and the threat of a cunning enemy kept things moving. I really enjoyed this one.

Honestly, if I'm being honest (which I am, always!) this was more of a 2.5. I just had to upvote it because of the interesting delegation aspect and the way that Team Andrews colored in protocols and tensions between the various alien races. It was very artfully done. What dragged down the rating here was the pacing - it s l o w e d down big time and made it very difficult to enjoy properly.

OMG, this book was so much better than the previous book (and made me feel bad for doubting Team Andrews in the first place). This time, there's another enemy, but they're far more insidious and dangerous. There's also racial tensions between 2 alien races who are engaged in a one-sided mission of genocide fueled by their religious beliefs. The last quarter of this book packs a major emotional wallop and ends on a cliffhanger designed to make you want the new book...which isn't even published yet, and doesn't have a title! Also, that UST is finally, FINALLY, resolved. #yaasss

Also, Doris Mantair's illustrations were a real treat. I don't know if the "let's make graphic novels of everything" trend is still happening, but if it is, and this book gets green-lit for a comic book adaptation, they should definitely hire her to do the art work or at least the conceptual designs.