Catch Me by Lorelie Brown 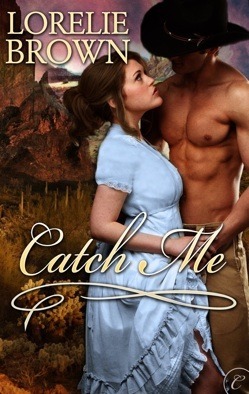 Have you ever picked up a book and then gotten immediately, even irrationally, annoyed with the main character(s)? That was what happened with me and the "heroine," Maggie. I couldn't stand her, and reading CATCH ME quickly became unbearable.

Remember when kids' TV shows from the 1980s and 1990s began introducing token female characters? If you're around my age, you probably do. They usually wore pink uniforms (to identify them as the female character, even while in uniform), and had, for the most part with few exceptions, a single character: "plucky female." They were the first to march stupidly into danger, the first to get kidnapped. They liked girly things, and were quick to say things, "I don't need help!" and "You're just saying that because I'm a girl!"

Token girl characters were annoying to me because they didn't really act like any actual girls or women I knew in real life. They weren't usually complicated characters ("I like girly things!" / "I don't want to rely on anyone else, even though I'm part of a team!") and more often than not ended up being the foil that resulted in the introduction of the villain because of how often they got kidnapped.

Maggie reminded me of these token girl characters that grated on me from childhood. Maggie robs a bank to get money to save her ailing father. A bounty hunter, Dean, is paid by the owner of the bank to hunt her down. If I remember correctly, he starts out in jail, and bringing in Maggie will not only grant him freedom from his cell, but also reward him with the sheriff's position he's been coveting. Anyway, he finds Maggie, who immediately starts waving around her gun and posturing. Even when she's captured, she continues to smirk and posture throughout the book, constantly needling her capture because it's fun to provoke him - she thinks it's hilarious.

And let's not talk about the instant love that's going on here. Dean is the worst bounty hunter ever. He immediately starts fantasizing about his captive-to-be when he sees her wanted poster, and pretty much immediately starts "flirting" with her (if you could call it that). There's zero chemistry, since neither character has much in the way of personality apart from "I'm a tough girl!" and "I'm the strong silent type with the tortured past!" It's no small wonder Maggie managed to escape several times.

DO YOU FREAKING JOB!

The twist at the end was okay. By that point I'd checked out. Some rapey guy is introduced to put Maggie in danger, and it's revealed that Maggie's father has a checkered history of his own. Maggie, of course, is a hypocrite. "How could you do crime in the name of good!" thinks the girl who robbed a bank to "save" her father. Honestly, she gets so offended every time someone in this book points out her crime. Why are you so offended, Maggie? You robbed that bank. Unless you have an evil twin running around who is blaming you for their misdeeds, own up to your sh*t.

I'm disappointed that I did not enjoy this book more than I did. It was a really good deal and I usually love Carina Press titles. Sadly, this one was a miss for me. I did, however, enjoy reading it with the lovely ladies from my romance book club, Karly, Casey, Sarah, and Helen 2.0. Thanks, guys! <3