From the Mists of Wolf Creek by Rebecca Brandewyne 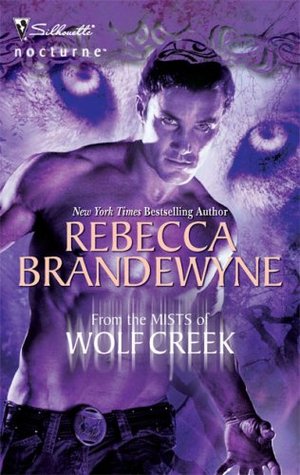 This is one of the stupid books I think I've read in a while. The heroine is such a moron. After a tantalizingly gothic prologue, we're treated to Hallie Moredumb-- sorry, Hallie Muldoon-- who is returning to her family ranch after the death of her grandmother. I guess she grew up there but was then taken away after her mother died. Now she's back to find her family secrets. But OH NO! There's a wolf in the road! And it... it... it LOOKED at her.

She slams on the brakes and then sits there in her WORKING car, trying to figure out what to do. Is the glass wolf-proof? Can it get her? Why is it looking at her? WHY IS IT SO BIG? Instead of waiting it out or, I don't know, DRIVING AWAY in her WORKING CAR, she grabs the Life Hammer (that thing you break open windows with if you, like, drive into a lake) and contemplates breaking the windshield open to SCARE THE WOLF AWAY. *

Never mind the fact that it's pouring rain.

By page 40-something, she still hasn't left the car, and we're still listening to her talk about how scary that wolf is and how golly-gee, she hopes she doesn't get lost-- there might be wolves out there. And at this point, I'm like, bitch, I hope a wolf does get you and bites your too-dumb-to-live head off. By page fifty she finally makes it to the family estate. There's a boring flashback and then she starts talking to herself and putzing around the house and I'm like OH MY GOD.

Rebecca Brandewyne is actually a pretty well-known bodice-ripper authors and I actually have enjoyed her retro works. So it's not like I'm a hate-reader. I bought this book because I liked the author and I'm actually shocked that this was so bloody awful, since it didn't read like her usual style at all. Not sure if it's the publisher to blame, or if she was using a ghostwriter, but this freaking sucked. Boo.

*Fun fact: I have lived in a rural area, and one time I had to tell my boss that I was late for work because I got blocked on a single lane road by an angry turkey. In case you have never seen a wild turkey before, those motherfuckers are huge. It was big enough to peer right over the hood of my car and into my windshield with its angry little turkey eyes, and it gave me such a gobbling that I can only assume it was cussing me out like a New Yorker at a tourist who wasn't aware that they were walking here. The turkey was apparently trying to impress its turkey ladyfriend, who was waiting coquettishly in the bushes as her man unleashed chaos in backwoods California. I've also had a bunch of prowling coyotes outside my car-- and coyotes are basically the Kirkland Signature version of wolves. And no, they could not get at me through the windows, nor did I need to reach for my Life Hammer.