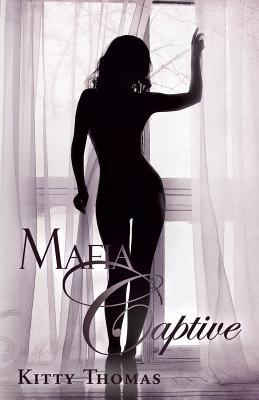 Kitty Thomas is an erotica author whose works I sometimes really enjoy, but she can also be really hit or miss with me. I loved TENDER MERCIES and THE GAME MAKER, which I thought were both the perfect blend of messed up and hot, but sometimes, I really, really don't like her books. GUILTY PLEASURES disgusted me and this one, MAFIA CAPTIVE, was really frustrating and weird.

Faith is in trouble when she witnesses a mob hit, but rather than killing her, Angelo delivers her to his twin brother, Leo, a tortured doctor and would-be priest who has a taste for servitude and sadism. Faith isn't into this at all, so he just keeps her for reasons??? while being totally frustrated that she isn't into his awesome lifestyle, but also it's Christmas and his family comes, so he also has her pretend to be his fiance??? so it ends up being like a bad Christmas comedy, only with mob bosses, BDSM, and OW drama that is actually consummated on-page multiple times because Leo, the hero, is a creep.

Props to the author for daring to push the envelope but this book in particular just felt really tone-deaf and Leo kind of felt like a sleaze. I didn't think he was hot at all-- he was such a whiner leather pants-wearing emo trash baby, and I got really tired of his nonstop pity party. It doesn't help that Faith doesn't have a spine at all. The heroines in this author's books are usually really submissive (and often TSTL), but in TENDER MERCIES and GAME MAKER, they at least had personalities and grit. Faith... is like a whipped dog. Only, you know, not in the way that Leo would like her to be because he's gross.

Also, BRB crying forever at that scene with the SPECULUM. Speculums have no place in erotica novels. No shade if you're into that, but it is definitely NOT MY THING AT ALL. #NopeForever #Bye