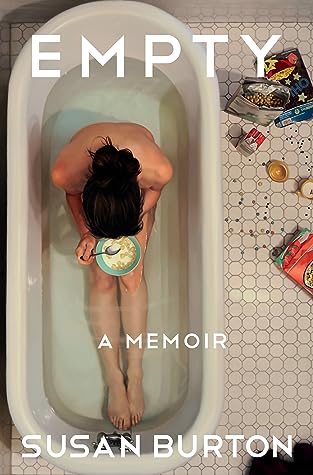 This was an incredibly difficult read for me and I think it will be even harder for people who have actually suffered from eating disorders, as it contains major triggers for eating disorders and anxiety. I actually think the author went about EMPTY in as healthfully a manner as she could, and I agreed with her that sometimes memoirs about the topic can read (accidentally) as sensationalist instruction manuals if they rely too heavily on numbers and tactics to get the point across.

Susan Burton has enjoyed a life of privilege, but privilege does not lessen or eliminate the onset of psychiatric illnesses. It can make getting good treatment better and prevent the onset of environmental stressors that come with poverty, but sometimes what happens is a sort of cognitive dissonance where people feel guilty for not being happy or healthy despite having so much. Mental illness is an equal opportunity disease that can affect anyone or everyone and I think that is something important to keep in mind when reading memoirs like these, that we don't get to choose how our brains are wired, any more than we can choose who we are, and what we look like.

Burton describes her childhood in Colorado and her college years at Yale with a frankness that borders between self-effacing and brutally honest. She really captures the hormonally-charged uncertainties of high school and adolescence, and how that gets magnified with anxiety spectrum disorders. Over the years, she vacillates between anorexia and bingeing and talks about her body dysmorphia and the way she repeatedly turned to food as both a means of comfort and control. I can't imagine sitting down and writing about myself with such introspection; memoirs are tricky, because they almost require that you have to be removed from yourself, and look at yourself as you might a stranger. I think it necessitates an incredible amount of self-awareness and self-honesty and I'm not sure I could do that, even as a writer.

This is not an easy read or even a fun one, but I found it incredibly fascinating. As a psychology major, I was required to read a number of memoirs written by people with mental health disorders and since college was a while ago, the language and vocabulary employed by some of these authors was not as sensitive as it is now. I like how the author chose to structure this memoir, and I liked how it ended on a hopeful note with how she ended up being able to tell others about her disorder and seek treatment. It's raw and it's honest and it really tries to do as little harm as possible without pulling back the punches.