The Taming by Jude Deveraux 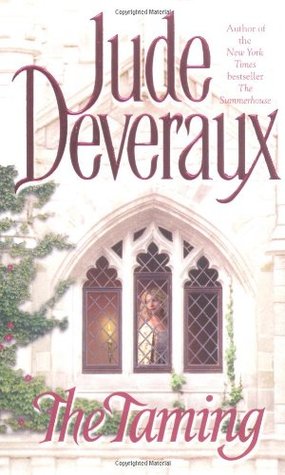 WOW! Ratings for this romance novel are all over the place, and sometimes I'm like, "Why all the hate?" But this time around, I can totally 100% see why this novel was so off-putting for so many people. Honestly, if it weren't for the attempt at making this "feminist" and the tongue-in-cheek narrative (which you could argue, correctly, trivializes the abusive themes of this book), this would have been pretty unbearable.

Apparently, I tried to read this eight years ago and DNF-ed it and all I remembered of the book was that the hero had lice. GROSS. But... historically accurate. Medieval times were pretty disgusting times and even the lords-- even the attractive ones-- probably had wretched body odor and body lice, so points for accuracy, I guess, and for not taking the Disney-fication route that so many other medieval period romances do. Even if pee sluicing out of an indoor-outhouse doesn't get your motor running, it's probably at least true to the times.

The plot of this book is pretty interesting. Liana runs her wastrel father's house and her stepmother, Helen, hates not having any power in her home. She demands that Liana get married off or she's taking her unborn baby with her and leaving. Liana's father knows he's letting go of a good thing but the idea of getting saddled with a replacement woman is such a pain that he gets off his ass and starts making arrangements for suitors to come and pay his daughter a visit. Liana, obviously, is displeased, as said suitors all start making obsequious compliments to her appearance while keeping one eye firmly on her dowry.

It isn't until she rides off in anger and comes to a beautiful man resting in a glen that she feels the first stirrings of anything other than resentment. She approaches him in a peasant outfit, watching him sleep, and when he wakes, he is disgruntled and they have an altercation that results in her throwing his clothes in the bog. When he demands she cleans them, she pounds them full of holes and swears to him that one day, she will make him crawl. It turns out this man is Rogan Peregrine and he is one of her suitors, and wonder of wonders, Liana chooses him because not only is he incredibly attractive (despite the-- shudder-- lice in his clothes), he's the only one who didn't bullshit her.

Unfortunately, Rogan isn't the prince she'd dreamed he would be and is not so easily tamed. His castle is literally filled with shit. The moat is full of black ooze, the tower he keeps his hawks in has mountains of bird shit on the floor. All the bread has dirt and sand in it, the peasants are thieving and desperate, and it's basically hell on Earth. Also, the "hero" is a cad of the first order: he has a mistress for every day of the week and they're named after the days they fuck him on, with one kept in reserve called "Waiting" in case one of them is on her period. He rapes the heroine twice-- once to prevent an annulment, and once just because. He won't let his servants obey her, he keeps his mistresses under her very nose, and he basically insults and denigrates her at every opportunity.

What makes this an interesting book is that his behavior is treated as unacceptable. Joice, Liana's servant, keeps telling her to be an obedient wife and obey him in all things, but Liana quickly decides that isn't the way to go. She connives and bargains her way into getting the servants and peasants on her side, and when she finds out he's with one of his mistresses, she sets the bed on fire with them in it. While it's painful to see such a competent, strong woman saddled with such a pig of a man, the fact that this is set in medieval times when women were legally considered chattel makes this easier to stomach, and Liana probably is acting with all the agency that was allowed her during those times.

Rogan slowly starts to change and respect his wife once he realizes how better off he is with her, and one of the funniest, character-turning moments is when his wife convinces him to go to a fair in disguise and he sees the peasants performing a morality play in which he is the villain. That's when I think he starts to realize how his thrifty, slovenly actions are affecting those around him, and that he isn't the strong, take-no-shits man he's envisioned.

In the background, there is a sort of Hatfields and McCoys rivalry between the Peregrines and another family called the Howards, and we eventually learn that this rivalry probably dates back to (as one might expect) a contentious matter of lineage and inheritance. The Howards also kidnapped Rogan's previous wife, who ended up annulling their marriage and marrying into the Howards family, so Rogan's "women are traitorous scum" mindset is partially because of his assumption that any woman he lets his guard down around will ultimately betray him to his enemies. A stupid assumption, rife with misogyny, but one that is gleefully facilitated by his family, especially his brother Severn, who have several horses in this race and are unwilling to let him go.

Despite how problematic this story is, I did enjoy it. It was refreshing to see a story of this type that had humor that didn't come across as forced and a heroine who was strong and empowered in a way that felt plausible for the time in which it was written. A woman who found out I was a romance blogger gave me a whole bunch of Jude Deveraux as a present, and so now I have about fourteen of her older books to read, including the next book in this series, THE CONQUEST. I must say, I probably wouldn't have picked up this author if not for this woman, since my first memories of reading THE TAMING were so bad, so it just goes to show that sometimes it's worth giving an author a second chance.