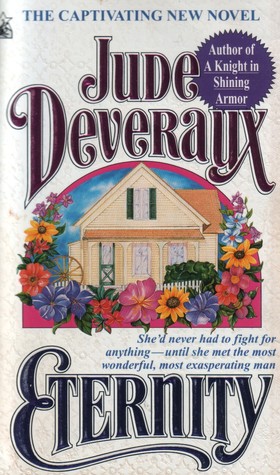 Jude Deveraux is one of the biggest names in romance but I didn't really start reading her work until recently because for some reason, I was under the impression that I didn't really like her as a writer. All that changed when one of my friends left a bag of romance novels on my doorstep featuring all of Deveraux's 90s romance novels in paperback. Bored, and intrigued, I read one fully expecting to hate it, and immediately launched into a binge of her backlist.

Carrie is the youngest in a family of older brothers, the daughter of shipping magnates and the sister's of wealthy traders and captains. Every birthday, they compete to see who can give her the most outrageously expensive present. She's always gotten her way, and is used to being the prettiest woman in the room.

She and her friends, all single, have started a "mail order bride" group for lonely single men, and when she notices one of her friends trying to hide one of the letters, she takes it from her, only to see a photograph of an incredibly attractive man with two children. Even though she knows her friend wants him, and even though he explicitly says that he's looking for a woman knowledgeable in cooking and farm life, Carrie decides that she knows best, "steals" him from her friend, tricks her father into signing the marriage papers, marries a proxy, and then heads to the town of Eternity with her many, many trunks in tow.

Joshua Greene is not pleased when he finds out he's been tricked. In fact, he's rightfully angry, and calls Carrie out for being naive and selfish because she, in her arrogance, basically assumed that he'd be so grateful for her beauty and company that he would forgive her lack of utility. Eventually, he decides that she has a week to prove herself, and Carrie immediately sets to winning over his son and daughter, Tem and Dallas, and manages to complete all of the tasks he's given her by hiring other people to do them for her (thus putting a significant boom in Eternity's floundering economy).

If you're familiar with the Harvest Moon series, there's an element of that: inexperienced city girl is forced to prove herself on a farm and find love. But instead of learning the land, she just uses her money to outsource the labor. "What's wrong with that?" is her rallying cry, over and over, and while I can kind of see her point, it does come from an incredible position of privilege-- but as it turns out, Joshua's sanctimonious is hypocritical, because he also comes from a position of privilege, and once we learn what his deal is, it's a little eerie how closely his story mirrors that of Carrie.

I thought this was a cute story and even though Carrie was SO ANNOYING in the beginning of the book, I did like her character arc, and that she genuinely cared for the kids. Spoiled heroines work for me if their character develops over the course of the novel. That said, I thought there were just way too many misunderstandings between her and Joshua, and it was frustrating that he kept everything he did from her, when just TELLING HER THE DAMN TRUTH (*insert genie gif*) would have solved all the problems. I also wasn't a fan of the gratuitous fat-shaming that came from Carrie, upon meeting Joshua's ex-wife. Come on, girlie. You already got the man. Don't be petty.

Overall, I was pleasantly surprised by ETERNITY. The first book of hers I read was THE TAMING, but I liked this better because there was no abusive marriage and no lice. Always a plus.