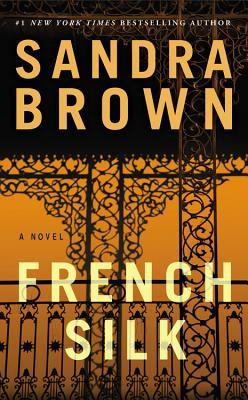 Trash Nenia likes bad books. She will scrape the dregs of the thrift store bargain bins, looking for that vintage pulp that makes her heart go pitter-patter. Then Trash Nenia comes back home and dumps her haul where I, the poor sucker in this equation, am forced to read it. I don't even remember buying this book in my Trash Nenia fugue, but apparently I did because it's been sitting on my bookshelf gathering dust until finally, I decided to read it and see if it was any good.

Warning: There are going to be a TON of spoilers in this book. It's one of the more un-PC titles I've read in a while, and while that doesn't always bother me (I find it hilarious and tend to poke fun at it in a satirical fashion), I understand that such content can be incredibly hurtful and offensive to others, so read this review with a grain of salt knowing that negative stereotypes cometh.

Our main character, Claire, is the CEO of a lingerie company called French Silk that produces high-end lingerie with racy catalogues that are meant to titillate and cater to the female fantasy. Jackson Wilde is an evangelical preacher who has taken umbrage with their products and puts her on par with hardcore pornography of the most illicit kinds. When he shows up dead one day, everyone has an idea that Claire was probably responsible, as she had the most to gain from his death-- or did she?

The district attorney of Louisiana, Cassidy, is on the case-- and what does he do? Immediately starts kissing Claire of course. And when his boss finds out about this inappropriate relationship, naturally he gets a slap on the wrist but gets to keep the case. BECAUSE THAT'S REALISTIC. Anyway, Cassidy basically has one method and that is "coerce a confession out of Claire by bullying her" and asking "did you do it, huh, didja, didja?" every five seconds like a two-year-old asking to go to the bathroom on a long car ride. Much to his shock, this approach doesn't work.

There are other suspects in the case, of course. Claire's One Black Friend, Yasmine, a model for her catalogue and a main shareholder in the company. Ariel, Jackson's much younger second wife, who was (naturally) fucking her step-son, Josh. There are other characters, too, like a hotel owner named Andrei who has a crush on Yasmine because she reminds him of his mom (*shudder*) and a congressman named Alister who is having an affair with Yasmine because his wife is a Meany Meaners who doesn't like the sex and keeps his balls in her designer purse. Who killed Jackson Wilde? And will Cassidy and Claire EVER get together? One of those answers should be obvious.

So what's wrong with this book?

From a technical standpoint, the book is way too long. 500+ pages for a book of this type and it starts to feel repetitive and cyclical. The beginning was great and then it lost wind. I skimmed the last 150 pages because I was bored but invested enough in the mystery that I wanted to find out what happened. I see, finally, what other reviewers meant about red herrings. The ending was rushed and literally ended like, "This person killed Jackson! ...But oh wait, it could have also been this person... but just kidding, because it was ACTUALLY this person for this dumb reason! Bet you didn't see that coming!" Um, yeah, I didn't, because all the other clues were pointing to other people. I actually liked the first "killer" the best and was going to give this book an extra star for its ballsiness, but of course, this is why we can't have nice things.

The sex scenes were also... bad. "Seeds of femininity" and "delta of hair" were used. I cringed.

From a social standpoint, this book does not hold up to the test of time at all. It was published in 1991 and feels about ten years older than that. All of the gay characters in this book are ridiculous flamboyant stereotypes and it's embarrassing. Picture that one aunt you have drunk at a party attempting to be "woke" about gay rights while also showing her privilege and her ignorance, and you have a rough approximation of what this "rep" is like. The one Asian character who appears is described as having "porcelain" skin. The one Black character, Yasmine, is a catch-all of Black stereotypes: she's described as "an African queen," "a temple priestess," and her skin is described as various kinds of coffee several times. The way she talks is about what you'd expect. Oh, and she's into voodoo, which ends up resulting in her killing herself at the end of the book, which made me pretty upset, but I was also secretly kind of expecting it, because the Black character often dies in these types of books. It was sad to see that this one wasn't an exception though, because she was way more interesting than Claire, and it was a shame to see her sexuality used as a tool to juxtapose against Claire's relative purity, while she was also reduced to what was essentially a plot device.

This book also did some interesting things, which is why it isn't getting a one star. The way evangelicalism is criticized in this book still feels very timely: Brown points out the hypocrisy of some of these radical groups. They condemn people freely while enjoying their own vices in private, seeming to think themselves above the doctrines of the God they preach. Claire also says some very eloquent things about censorship and fascism, and talks about how people who can't think for themselves follow strongman leaders who feed them misinformation that confirms with their world view in an attempt to manipulate their behavior. (Hmmm, sound familiar?)

Some of Sandra Brown's older books are even worse than this one-- the 1980s bodice-ripper ones especially-- but I actually found those less offensive because they weren't really trying to be inoffensive. This book falls into that awkward transitional period where people were trying to incorporate "diverse" rep but didn't know anything about what they were doing, so relied on stereotypes and actually ended up doing themselves a worse disservice than if they hadn't tried to include any kind of diverse rep at all. I would not say that this withstands the tests of time and you should probably give this one a miss if the things I mentioned offend you.