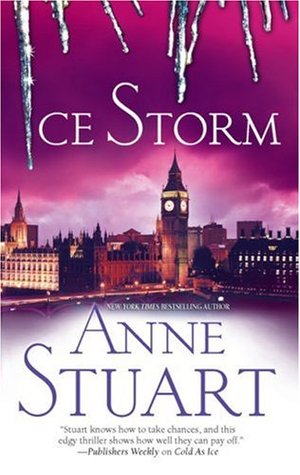 Anne Stuart is one of my "problematic faves." I can totally tell that a lot of people are going to read this book and be upset, and while I understand why (spoilers to come), for whatever reason, it just taps into all of the things that I really enjoy in a dark romance, which made it work. She's notorious for her antiheroes, heroes who could easily double as the villains in a different story, and I am such a sucker for villain love stories, so that's basically my catnip.

When Isobel was young, she was traveling abroad and nearly raped while hitchhiking at night. She was saved by an attractive man named Killian, also traveling, also alone. He ended up befriending him and because he was older and told her he had a girlfriend, he seemed safe and unattainable. Little did she know that he was actually a cold-hearted operative, planning on seducing her as part of his cover and then leaving her for dead once he'd finished.

Now Isobel is the head of the Committee, a paramilitary group of secret agents who tackle espionage. When she's instructed to give safe passage to "the most dangerous man in the world" for information, she recognizes him on security camera footage as being the man who wronged her years ago. And he did wrong her-- not only did he seduce her, lie to her, and treat her like a fool, he also drugged her and had sex with her while she was only half-conscious over several days. Cool.

When she meets him again, she's furious. Understandably. But she isn't prepared for that angst to hit her like a sledgehammer, making her feel like a lovefool teenage girl again. And of course, he's still a quasi-sociopathic asshole, who uses her sexual hang-ups to taunt her and mockingly refers to her as "princess." Again, he's practically an unredeemable douche by most standards, but I'm just sitting here, twiddling my thumbs and going "YAAAAASS" because this is the kind of material that I purchase in back alleys (by which I mean, on the computer, in the dead of night) like a some gritty, edgelord kid buying his first bag of weed in the early 2000s. Romance is my drug of choice.

I ended up liking this story a lot. I've read the first book in this series and didn't really care for Bastien all that much (although I liked the beginning of the book). Killain was much more on-brand for Stuart: a rakish, pithy, rangy guy with no morals and a heroine-shaped chip on his shoulder. It's second chance, enemies to lovers, with a heavy dash of villain-gets-the-girl, which are three of my favorite tropes in romance at the moment, so having all three of them was like Double Jeopardy.

I'm rating it three stars because the story itself wasn't all that great and I didn't really care for the last act, or the fact that characters from the previous books kept getting shoehorned in here and getting their own POVs. Also, the Middle Eastern and Asian rep in here is questionable. Killian has a Middle Eastern sidekick named Mahmoud who has sworn to kill him, whose sister was a suicide bomber, and who keeps getting described as wild and savage. One of the other Committee guys is a Japanese guy who has given himself the Western name "Reno," after a video game, and at one point he's wearing fundishi (the underwear you wear beneath kimono) printed with samurai Hello Kittys. Cringe.

I did like Reno, though. He's like a Goth assassin, with his long red hair and leather jackets, and kind of has the aesthetic of one of those visual kei guys. I was picturing him as one of those hot guys from L'Arc-en-Ciel specifically (I was always a fan of Hyde and Sakura). If you don't know what visual kei is, it has all of the fanfare and costume drama of K-pop bands, but Japanese and gothy. *hearts*

Overall, this was a solid addition to the series and reminded me why I am so obsessed with Anne Stuart, even though some of her books wind up being duds for me. If you like dark heroes and romantic suspense, the Ice series will probably quite enjoyable for you!