The Dragon Lord by Connie Mason 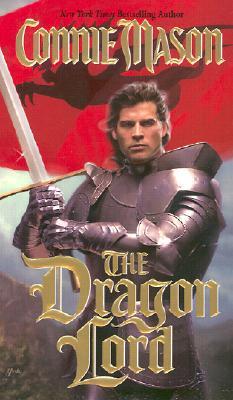 When I was younger, I used to take people out to bookstores on first dates because I figured at least if the date was bad, I could get a book out of the experience. This book was purchased on such a date, because I have zero shame. Love me, love my bodice-rippers.

The cover on this one is particularly brilliant. There's so much to appreciate here. The Runescape armor. The pixelated background (I have to upload a picture of the castle on the back cover to my Instagram-- it's hilarious). The raised, shiny gold font in Gothic letters. The fact that the guy's face looks real but the sword looks like a cartoon and you can distinctly see the faint blurring where the photo manipulation took place. This is bad cover design taken to near genius levels, and I think Trash Nenia knew that when she bought this book.

Sadly, the book itself is not so great. The book literally opens with the man banging his mistress, a woman named Veronica. In the 1200s. When he goes to see the king, however, he finds out that he's going to have to marry one of the daughters of a deceased (read: executed) lord in a territory by Scotland to help keep the peace, so he goes there instead where he meets the grieving widow and her two daughters, Rose and STARLA. Okay, if Veronica is not a name you would generally see in the 1200s, Starla is 100% not a historically appropriate name.

I am not so petty that I would DNF over a simple matter of names, however. (Actually, I am, but that wasn't the reason this time.) The writing is exceptionally not good. Prose so deeply purple that it would stain your whites if you put it in the washer on warm. A heroine who is stompy and annoying, and meek and simpering by turns. A stalwart hero who probably practices his stoic Burt Reynolds faces in the polished copper mirrors (although considering the historical accuracy of this novel, the mirrors would probably be made of Tiffany glass hung on Paris green wallpaper).

Read at your own risk.