The Long Con by Cecilia Tan 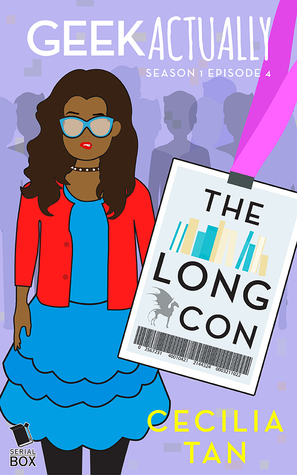 In case you're new to the whole Geek Actually serials, GA is a collection of (very) short stories, all under 50 pages, chronicling the romantic adventures of a bunch of geeky women with careers. Think Sex and the City...only with geeks. It's a great concept, and for books 1 & 2, I was sold - hook, line, and sinker. After the glaring disappointment that was BOSS BATTLES, though, I was a little hesitant. Because here's the thing: each serial is written by a different author. I initially expressed concerns about this in books 1 and 2 but they meshed so well that I figured it wouldn't be an issue. Well, book 3 noticeably deviated in quality - like, "is this really the advanced reader copy and not a rough outline?" deviated - so I was not quite as wholeheartedly excited about picking up book 4.

THE LONG CON, however, is written the way books 1 & 2 were, i.e. fairly well. I do think that #2 is probably my favorite so far in the series, with #1 being a close second. Since the books are so short, they focus on a handful of the characters in each episode so as not to spread the content too thin. This book mostly focuses on Michelle, Elli, and Aditi. Aditi and Elli are my least favorite characters, so I wasn't too happy about that (Michelle is OK).

In THE LONG CON, Elli, Michelle, and Aditi all end up going to the same convention - a book con, modeled after BEA. Michelle is there wearing her editor cap, trying to keep Aditi (her author) in check while also editing a rather terrible manuscript from a best-selling author. Aditi is feeling anxious about the sequel to the book that she's already having second thoughts about. And Ellie - well, Elli is Ellie...immature, self-centered, and utterly obsessed with all things fandom.

I felt like Aditi's flakiness is hammered out better here. We finally understand why she's so insecure about her book, and why she's reluctant to move forward. Haven't we all had moments of self-sabotage, where we're so literally terrified about the chance to finally fulfill our dreams that we subconsciously end up screwing ourselves because deep-down we don't feel deserving? I've definitely felt that. I've felt that hard. So even though I didn't really like Aditi for being a flake in previous books, I felt like this revelation helped me understand where she was coming from better.

Elli's story was okay. She ends up befriending another cosplayer who draws comics and also happens to be in a wheelchair (I think her name was Ruby). Ruby was really cool and I liked how the concept of able-ism was treated in this segment and some of the ways that Ruby incorporated her chair into her cosplays (i.e. using it as the pumpkin carriage for her Cinderella costume). I didn't like how Ellie immediately started pushing her for a job as an assistant, especially when Ruby says that she doesn't have all that much money and doesn't want to depend on people. It felt opportunist and gross to me, and considering how she treated her last two employers, I'm skeptical of where this goes. Honestly, it's too bad Ruby isn't a main character - she was really cool and I'd happily read more about her.

Tan teases me with cameos from my actual favorites in the story - my favorite F/F couple Vivi and Christina experiment with some rough sex, and Taneesha goes on a "date" with this cute gamer dude. However these sections are short and left me feeling more frustrated than happy. This is why I don't tend to like books with multiple POVs; I always like one set of characters more than the others...and the ones I love the most never get as much air time as the ones I can't stand. (I see you, GoT.)