The Leopard Prince by Elizabeth Hoyt 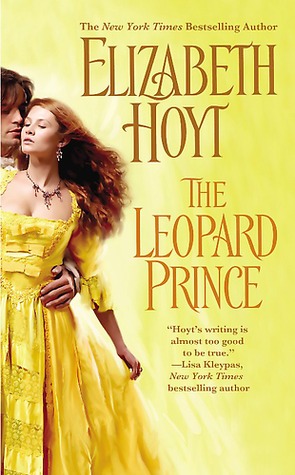 Man, when Elizabeth Hoyt is on her game, she is on her game. I've had several misses since reading the book that originally turned me onto this author, DUKE OF SIN, but reading THE LEOPARD PRINCE reminded me of why I got into her writing in the first place.

Lady Georgina doesn't need a husband because of her inheritance. She's been content to remain a virginal spinster all these years, doing as she pleases, cheerfully indulging in her eccentricity. All of that changes when she begins to notice her land steward, Harry Pye, in a decidedly un-business-like way.

Harry Pye is the strong, brooding, silent type, but he has a dark past that has to do with one of the local lords and a missing finger on one of his hands. That past begins to resurface when the sheep of local farmers begin to die - clearly poisoned by hemlock - and all of the townspeople begin to suspect that Harry Pye is the one responsible for all the killings.

The only one who believes he's innocent is Georgina. And as the attraction between them intensifies, class differences and the issue of complicity begin to arise. If Harry didn't kill the sheep, who did? How far will they go to frame him? And how far will she go to save him?

I was complaining recently about how Lisa Kleypas throws in half-assed murder subplots into her books. From what I can tell, Hoyt indulges in the same habit...but hers are actually really well done, and suit the tone of her books. The murders in this book match the dark narration style, as well as its serious tone. Class differences are a theme in THE LEOPARD PRINCE, which gets its name from a fairytale of the same name that is slowly told over the course of the story as an allegorical reflection of what is going on between Harry and George. Abuse of power is another theme, one that is seen all too plainly with the discussion of rape, abuse, neglect, and cruelty (although nothing too graphic).

Another thing that made this book for me is an excellent cast of secondary characters. Bennett was great, as was Will (I don't normally like child characters in romance novels, but he was great). All of George's siblings were hilarious, except for Violet, who didn't really win me over, not even at the end (although I no longer hated her by the end). Her servants made me laugh. I also liked how Hoyt took care to give the townspeople personalities. They weren't just a faceless mob. They were people trying to survive, which made their desperation and anger so much more terrifying when they turned on Harry and began baying for his blood.

Also, the sex scenes in this book - are great. There are a lot of them - a surprising amount actually, for a book that isn't being marketed as erotica - but they're all very well written and don't overtake the plot. I'd give this book a steam factor of 10/5. Harry's pretty kinky, actually. I was shocked!

If you're one of the people I "bullied" (read: assertively encouraged) to read DUKE OF SIN, and found yourself disappointed by some of this author's other efforts as I was, pick up THE LEOPARD PRINCE and have your faith in all that is Hoyt redeemed. I need the other books in this series, asap...