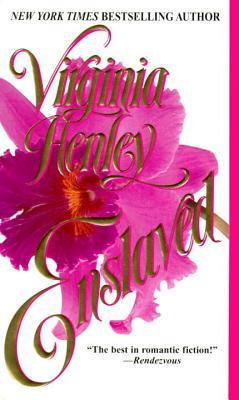 Virginia Henley is one of those authors who shows up on a lot of "best of" historical romance lists, but I'd never actually read any of her work. When the e-book version of ENSLAVED went on sale for $1.99 a few weeks ago, it seemed like it was meant to be. I'm pretty well known for my reviews of historical romance reviews, and I've had a couple people asking me to write more snarky bodice ripper reviews. ENSLAVED was the perfect book to break my hiatus! Better still; I got my friend and co-mod, Sarah, to agree to read it with me. Bad HR novels are always better with friends. Always.

The best way to describe ENSLAVED is that it's like if you wrote a historical romance novel following the template of a play. There are three "acts" in this book, and they don't really fit together as well as they should because so much of what cinches them together relies on heavy suspension of disbelief.

Act I sets the stage. We meet our heroine, Diana. An heiress who is under the guardianship of her horrible aunt and uncle. They desperately want her money, and plan to be rid of her by marrying her to a wastrel who is up to his ears in debt, Peter Hardwick. Diana isn't attracted to Peter at all, even though he's very good looking, because he's a fop and she likes real, "manly" men: Conquerors. Knights. She thinks it would be so much better to live in medieval times than Georgian times. But her aunt and uncle are determined and will stoop to anything in order to see Diana out of their way.

This part of the book is probably my favorite because I thought it was hilarious how Diana managed to find ways to spite her horrible relatives, and her relationship with Peter and his (uncle??), Mark Hardwick, were interesting. I liked her encounters with the stuffy Earl, and how she flaunted his desire for her at any opportunity, rather than sinking to her knees in a puddle of lust.

Act II occurs after Diana randomly decides to "try on" a Roman helmet and it transports her to Ancient Rome. She's almost crushed by the patrician, Marcus Magnus, who manages to stop just in time and is so taken by her blonde hair and violet eyes that he decides to enslave her on the spot. He isn't pleased when she doesn't want to sleep with him, so he sets her to floor-scrubbing, and Diana hates menial labor so much that she ends up giving in and then the sexings start in earnest, with horrible phrases like "manroot" and "love slick" and "dark honeyed cave" and "creamy with craving" along with countless uses of "marble-hard" and allusions to peens as swords, with cringe-worthy double-entendres like "I shall bloody you, but not with my whip" to refer to taking someone's virginity and referring to sex as "swordplay."

This part of the book takes place in Nero's Rome, and obviously Nero is the bad guy and obviously since he is the bad guy, he is bisexual but prefers the company of men (as villains of romance novels of this time period often do). The hero's brother, Petrius (like Peter - get it), is also bisexual, and he and Nero end up getting it on later in a weird D&S-style relationship while plotting to ruin the relationship of Diana and Marcus. Petrius has it in for Diana because his attempt to woo her with animal sacrifice (warning: a cute baby lamb dies in this book) and rape did not go well, so now nobody else is allowed to have her since she spurned his "affections." Shockingly, his attempt to murder Diana succeeds. She's taken to the Circus Maximus, and turned into a human torch while having lions sicced on her, and her suffering ends when Marcus stabs her to put her out of her misery.

Act III takes place after Diana's "death". Being stabbed has put her back in the present, where she learns that she's been missing for months. Her relatives have declared her dead and taken her money and are none too pleased to have her return. Diana ends up under the care of Mark, who is Marcus's descendant, and who she now loves thanks to her stint in Rome. They start having the sexings. Diana spurns Peter. The guardians get a doctor to commit Diana to an asylum on the pretext that she is delusional because she believes she really did go to Rome. It turns out that Mark has "past memories" of his life as Marcus now for some reason(????). He rescues Diana from the asylum and together, they blackmail the evil relatives into giving them permission to marry. Peter tries to kill Diana and Mark and ends up getting thrown from the roof. Everyone lives happily ever after. The end.

There was a gritty bodice ripper in here fighting desperately to get out, but it was drowning in Bertrice Small-level purple prose and bad plotting. The three-act formula didn't work because part I feels like the opening to a different book from part II and part III weakly attempts to tie parts I and II together by bringing up past lives and hinging on odd coincidences. Plus, the writing is bad. At one point, Diana actually says "Ohmigod." And it's written just like that, too. Cringe.

Did I enjoy this book? Yes and no. It was fun to laugh at, and was so over the top at times that it was genuinely entertaining, but other times it was plodding and dull. I've said this before and I'll say it again. 90s "bodice rippers" were part of an uncomfortable transitional period in the historical romance timeline where writers were seemingly trying to clean up the unsavory aspects of 70s and 80s bodice rippers (villainous heroes, unambiguous rape scenes, graphic torture, racism, misogyny) while also trying to keep that same gritty edge. What ends up happening, though, is that you get bland romance with alpha d-bag heroes who stop just short of rape with total, over-the-top cray-cray villains who are probably rejected "heroes" who escaped the archives of unpublished bodice rippers that never made it past the 80s and dead-pissed about it. I wanted to give this book a 1* for annoying me so much, but I made it to the end and it gave me some much-needed laughs, so I'll round up.