Forever and the Night by Linda Lael Miller 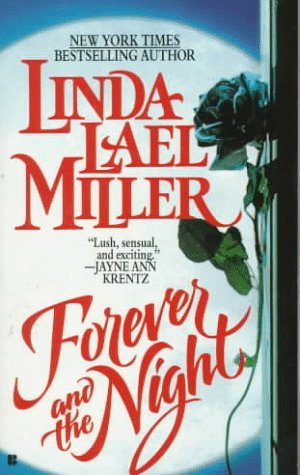 Aidan lifted his hand in farewell. "Take care," he said, and then he simply faded away, boots, swastika and all (61%).

Sometimes you read a romance novel, and it's like finding yourself standing in the middle of storm-blown wreckage. "What just happened?" you ask, staring at the upside-down chest of drawers and the lone cow mooing sadly in the middle of a deflated kiddie pool. "Everything was fine and normal before...and now it's not."

I love vampire stories, so when I saw that this rereleased title from the 90s was only $1.99 on Kindle, I messaged fellow vampire-lover Heather and said, "Hey, want to buddy read this with me?" We started a week later, filled with what, in hindsight, seems like an almost reckless amount of optimism and excitement because it immediately became clear that FOREVER THE NIGHT was not going to be a book either one of us was going to enjoy. Heather, the trooper, finished it in two days (you can read her review here). I slunk away to Amazon like a coward to try and return the book for a refund around the 12% mark, only to find out that I'd missed the return deadline by a day. Cursing inwardly, I returned to FOREVER THE NIGHT to consign myself to the miserable fate I'd chosen.

FOREVER AND THE NIGHT is about Neely, a human, and Aidan, a vampire. Neely used to work as a senator's aide until she found out he was a bad dude and had some dealings with drug cartels. Because she knows their secret, many people now want her dead. Aidan is a vampire who hates being a vampire. He was turned against his will by a woman who was infatuated with him at the time and now skulks about, feeding off sexual predators and people who subscribe to the "very basest of pornographic magazines, the kind even the most flagrant liberal would happily consign to the bonfire" (18%). What does that even mean? Also, "flagrant liberal"? Thanks a lot for that...

Aidan meets Neely while she's trick-or-treating with her kid nephew (or brother? I can't remember), and decides he's smitten with her 12% in. Neely decides she is in love with Aidan 16% in. Keep in mind that at this point, they've exchanged the same amount of pleasantries as any other stranger - in fact, I've had more meaningful conversations with random people I've met on trains. Even Bella and Edward would sit these two down and be like, "Okay, guys, why don't you think about this because you're moving a little fast..."

Aidan starts stalking Neely. He sneaks into her room while she's sleeping, and she thinks that he's been summoned there by her attraction to him. He has psychic sex with her in her head. Then he leaves and uses magic to pin her down to her bed, but she has to use the bathroom so badly that her desire to pee overcomes his vampire will and he is Seriously Impressed. Just remember: "No force can stop a woman who needs to go to the bathroom" (32%). #NeverthelessSheUrinated

The middle of the book is basically a giant melodrama hinging on this instant love. Aidan is so anguished, so tortured, so sorrowful, because he doesn't want to be a vampire. Neely is so mournful about Aidan's suffering. She wants him to have sex with her, but he doesn't want to hurt her. He doesn't want her to become a vampire, and yet he wants to be with her forever. If you've read TWILIGHT, this probably sounds really familiar to you (Aidan's even described as a marble statue), although what works for adolescent teenagers doesn't really work for, well, adults.

The highlight of this book is really when Aidan barges in to rescue Neely wearing a Nazi uniform that he just happens to have lying around.

He was wearing the uniform of a Nazi officer, of all things, and he slapped one gloved palm with a riding crop... (59%)

There are so many other things he could have put on. Why a Nazi uniform? Where did he get it? Later on in the book, it says that he stole it, but from whom? And why? Was he one of the degenerate pornography readers from Aidan's "OK to Feed on" list? I have so many questions....

The book's mythos gets even weirder with its mentions of angels and Atlantis. Apparently the first vampire experiments were done in Atlantis(?). This isn't really explained, and that's a shame because I have so many questions about that beginning with the word "why." Vampires can also apparently time-travel & dissolve into vapor, but this isn't really explained either which results in a number of loopholes - especially towards the end. There are also angels, who seem to oppose the vampires, but an angel also turns Aidan back into a human at the end of the book and an angel also saves Aidan from being turned back into a vampire by the evil Lisette at Valerian's request. That's right. A literal deus ex machina. Just like the good ol' days.

Then there's the sex, which is almost unequivocally terrible. Here is a sample.

His tears - tears born of a joy so fierce he feared he could not contain it - fell softly on her cheekbones and sparkled like diamonds in her hair.

Neely arched beneath him, pleading, in stark Anglo-Saxon terms, for what he and he alone could give her (69%).

Oh, and let's not forget this gem.

He...aroused her all over again simply by caressing her eyelids with the tip of his tongue (99%).

I think it's pretty safe to say that I did not enjoy this at all. What a shame that I purchased the sequel...