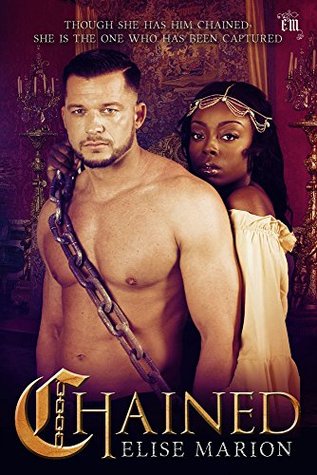 CHAINED was an impulse item from the free section of the Kindle store. Part of the allure - apart from it being, you know, free - was the prospect of a historical interracial romance. The perspectives of people of color are sorely lacking in most historical romances (the only authors I can think of offhand who write them with any regularity are Courtney Milan and Beverly Jenkins), so this was a huge selling point for me.

I was therefore annoyed when I began reading the book and realized that it wasn't "A Medieval Historical Romance" as advertised on the title, but a medieval-inspired fantasy.

Those are two very different things.

Putting my annoyance aside, I continued to read the book despite its deceptive packaging, and found to my surprise that CHAINED was actually a pretty decent story. It is set in a world called Alemere. The heroine, Gwen, comes from a country called Dinasdale. Her people are proud of their royal heritage and lean towards archery. The hero, Caden, comes from Daleraia. His people are less refined, ruthless, and brutal. Unlike the Dinasdalians, they have no gods; their sword is law.

Gwen is engaged to a prince from Lerrothe, but her wedding night is unsatisfactory. She doesn't really want to be a princess, anyway. She is a skilled archer: when we meet her in the beginning, she shoots five men in her father's woods for attempting to rape a girl. In her father's absence, she is the word of Dinasdale, so when a band of Daleraians are brought in after a woman in her kingdom is raped and murdered - allegedly by a member of the Daleraian noble family, Gwen has to decide what to do with them. She decides to imprison them but keep them in good condition for ransom. Caden ends up imprisoned in Gwen's own quarters because of his constant attempts to escape.

It doesn't take Gwen and Caden long to realize that both events - the rape and murder and Gwen's own wedding - might be the byproducts of the sinister machinations of someone attempting to sow discord in Alemere, thereby breaking the tentative peace between Dinasdale and Daleraia. It also doesn't take long for them to realize that they have a rather potent attraction to one another, either.

I enjoyed this story. It's reminiscent of GAME OF THRONES in some ways, and the court intrigue is well done. I liked Gwen's character. She is a strong woman with good political sense, who isn't afraid of her sensuality. She killed five men and kneed a would-be rapist in the testicles. She never did anything in the book that made me shake my head and say, "Well, that was stupid!" She was bad-ass.

I was less impressed with Cade's character. There is an OW and Cade does get kind of wishy-washy about her and Gwen, although it's always clear who he prefers more. Plus, he does something very stupid towards the end. When Gwen falls under suspicion he's forced to imprison her and insists on doing it himself so he can explain the reason why to her. He doesn't do this. Instead, he has sex with her, lets her fall asleep, and when she wakes up, basically says, "Congrats! You're going to jail!"

Overall, CHAINED is one of the better finds I've gotten from the "free" section of the Kindle store, which can be a bit of a crapshoot. I would recommend it for people looking for a fun, light fantasy read. The author really needs to change that "Medieval Historical Romance" tagline, though. I can't imagine that I'm the only person who felt cheated when they found themselves reading fantasy...

Also, there is a cliffhanger ending, in case you're curious.