So Sweet by Rebekah Weatherspoon 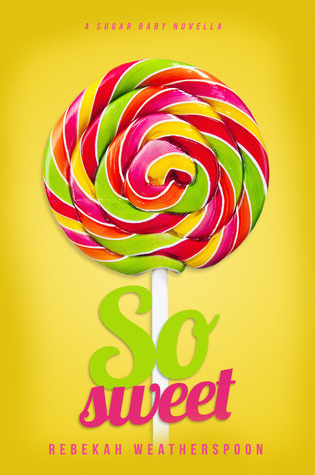 SO SWEET was part of a giveaway via Instafreebie a few weeks ago. Even though I'm so over billionaire romances, a few phrases leaped out at me while reading reviews: "sex positive," "woman of color," and "realistic." Words and phrases that, you'll agree, don't often appear in books of this genre. I decided to take a look.

Under the - ill-advised - suggestion of Adler, Kayla decides to make money in the tried-and-true way of new adult novels everywhere: sell sex for money. However, rather than looking for a tattooed rock musician, or an angsty artist who is secretly rich, she looks for a sugar daddy by going to Arrangements.com, which is kind of like the internet dating equivalent of an escort service. She will hook up with an older guy, basically trading sex for payment of student loans, apartment rent, and clothes.

At one of the mixers, Kayla doesn't really feel the scene, and ends up sitting down at a table with a guy who says he isn't feeling the scene either. They talk - and Kayla realizes (SURPRISE!) that this is Michael Bradbury, the founder of Arrangements, as well as several other endeavors. He's no Christian Grey, though. He has the nerdy hippie vibe of a tech-made billionaire, and I appreciated that. I also liked the portrayal of Kayla, and some of the issues she dealt with as a young black woman.

SO SWEET is short but, well, sweet. Clocking in at only about 100 pages, a good portion of the novelette is about sex. It's well-written sex, but doesn't leave much in the way of plot or character development, and while I liked Kayla and Michael, I didn't really get a feel for who they were as people until the very end, when Kayla starts having some friendship problems with Adler, and both Michael and Daniella give her very good advice on how to deal with it (which she follows!).

SO SWEET was a short, fun read, just what I needed after coming back from vacation. I'm not sure if I want to read the sequel - $2.99 seems like a lot for such a short book - but I do appreciate the author putting it up for free & it's always nice to read books written by and featuring PoCs. Diversity!