On the Brink by Kate Willoughby 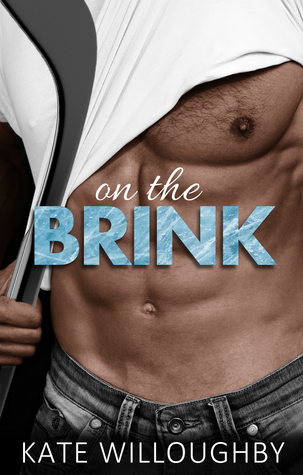 Reading Elle Kennedy's THE DEAL taught me that I could enjoy sports romances. That realization gave me the courage to pick up UNDER THE SPOTLIGHT by Kate Willoughby: another hockey romance.

I liked UNDER THE SPOTLIGHT. It was similar to THE DEAL, except with older characters and an interesting soap opera twist that seemed like it could have been taken out of a scene from Jane the Virgin. Willoughby had a lot of interesting things to say on the topics of celebrity and attraction that made me sit up and pay attention.

I also liked the bro talk. One of the things that makes Kennedy's books so beloved is the bro talk. These ladies write guy talk in a really funny, engaging way that makes us feel like we're part of the club, too. I loved reading about these hockey guys talk about what they loved best - hockey, mainly, and also sex.

My favorite character in the book was actually Hart, who was also gay. The way he was portrayed in the book was really nice. He was attentive to his boyfriend and was not portrayed in a stereotypical way. He just came across as an ordinary guy with a bit of a snark streak who also loved dudes.

I enjoyed the story enough that I later messaged the author asking her if she had any intention of writing more about Hart and his boyfriend, Jeremy. She told me she did, and that was her next project, and that it would be coming out in summer. Lo and behold - my joy when I saw and was accepted for this lovely, lovely ARC on Netgalley. Come to me, my precious!

ON THE BRINK takes place not at the age they are in the main books, but back in college. Jeremy is proudly out and has a crush on one of the hockey players at his school - Hart. When he drags his friend to watch a game, Hart's eyes keep locking with his. After the game, Hart tells him gruffly that he's a distraction, without really elaborating as to why. Then they happen to notice Jeremy's car, which has been defaced with the f-word, and has all the tires slashed. Hart offers him a lift home but they end up making out in the car instead, and Hart gets embarrassed and angry and kicks him out.

In the aftermath of this incident, Jeremy turns the car incident into something he can own. He paints it with rainbow colors and writes "proudly out" in glittery lavender over the f-word. It catches local attention and gets him an interview with the college paper and an intervention with the school principal who wants to make the school a safer place for all diverse students (his intentions are coming from the right place, even if he has all of the subtlety of Dudner Mifflin's Michael Scott).

Some people have been concerned about whether it's GFY. It's not. Hart is seriously buried in the closet, but the signs are there. I think it also makes sense why he would be reluctant to come out, because sports can attract machismo dudes who think that masculinity means being anti-homosexual and anti-woman. I thought his rationalizations of past actions were well done, even though it upset me to see him say cruel things to Jeremy, or selfishly offer him a carte blanche type of relationship with the condition that it's done totally in secret and only in their own home.

There is an HEA but it kind of made me sad, because both characters still feel the need for secrecy. I was hoping for a leap to how both of them became so accepted in the present day, with the Barracudas. I was also hoping to find out who the jerk was that defaced Jeremy's car, and whether he would get his punishment... A longer novel might have answered these questions and more. But this wasn't a bad book. I think it's the author's first M/M work, too, so that might account for some of the awkward scenes, as well.