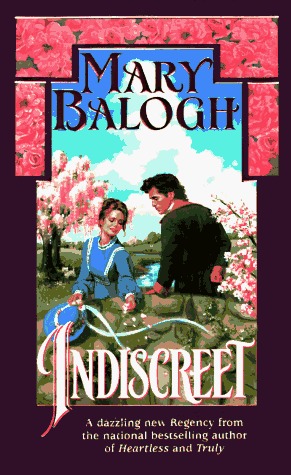 I don't normally go in for fluffy regencies like this, but Mary Balogh came highly recommended to me by Jenn Young, and I really liked the other Balogh story I read, so I figured, Why not?

Catherine Winters is a virtuous widow who rents a small cottage from the local "royalty", Mr. and Mrs. Adams. Mr. Adams is the twin brother of a viscount, and rather fond of Catherine, and Catherine is sometimes invited to parties at their estate whenever they have odd numbers, because of her manners and quiet charm.

One day the viscount comes to town and Catherine, mistaking him for his brother, smiles and curtsies at him. The Viscount Rawleigh, Rex, takes this as a proposition and immediately sets out trying to bed Catherine & make her his mistress until he returns home. But Catherine refuses him staunchly, which perplexes him as much as it makes him angry, and even more determined to have his way.

The attraction between Catherine and Rex is undeniable, but Catherine reacts oddly to his overtures. It's very clear that something is wrong, and that this "something" has a great deal to do with Catherine's lovely manners, her widow status, and the reason that she is so utterly, unequivocally alone.

I really wasn't expecting to like INDISCREET as much as I did. It starts off very slowly, and while I could appreciate the comedy of manners, it did start to get a bit dull. So did the constant bickering between the hero and the heroine. Rex does border on an alphahole at times, but he is self-aware in a way that many alpha-holes are not. By the end of this book, I was a Rex Fan.

Fans of slow burn romance and romance with substance will like INDISCREET, if they're willing to settle in for a bit of a wait. The sex scenes in this book are rather tame, but quite sexy, and fairly frequent. It was quite fun to see the hero and heroine fall in love slowly, empathizing with one another before exchanging vows of undying love - that's far more realistic, and all the more romantic because of it! Also, that ending was tense. I was NOT expecting that! o.o