Love and War by Patricia Hagan 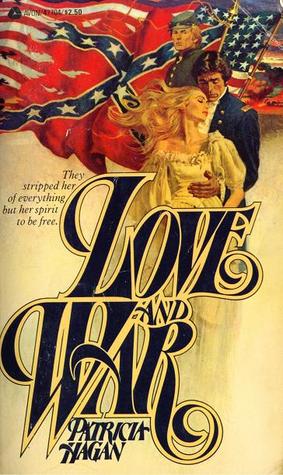 One of the greatest things about the Goodreads community is that it has introduced me to books I never would have picked up on my own. I got interested in bodice rippers two years ago, and there's been no turning back.

LOVE AND WAR is a brutal read. It takes place during the Civil War and doesn't try to romanticize or sugar coat it at all. There's blood and gore and corruption and violence and rape and treachery and greed...entire family members are split down the middle of their ideologies with terrible consequences...relationships are destroyed...

Kitty Wright is the daughter of a Federalist sympathizer. Since he lives in the South, this has made her father the object of suspicion among the other men in town, with some of them even speculating that he has ties to the Underground Railroad. Kitty's mother is a spoiled, selfish woman who aspires to be a wealthy plantation owner's wife, and is resentful of her husband for freeing their slaves & having a simple living.

Kitty is a really cool protagonist. She can shoot a gun, ride a horse, and sticks to her principles. The town doctor trained her in medicine when she was young, so she treats the slaves and the poor, and she's damned good at what she does. The author doesn't tell us that Kitty is amazing - she shows us, time and time again, replete with many gory and unpleasant passages involving sutures, amputations, and even sucking out snake venom (which you are apparently not supposed to do).

The love interest, Travis Coltrane, doesn't show up until about halfway through the book. Her first romantic liaison is with one of the wealthy Southern gentlemen's sons, Nathan, although he doesn't understand Kitty at all, and wants to mold her into something he can enjoy. Kitty, however, doesn't want to settle for someone who can't love her for who she is and resorts to sneaking around with her because he's too cowardly to stand up to his own father and declare their relationship publicly.

Then something terrible happens, and Kitty's father gets beaten and lynched. Kitty is kidnapped by an overseer named Luke Tate, who rapes her repeatedly. Kitty's reaction to this is pretty realistic and horrifying. Travis Coltrane and his regiment of Union soldiers eventually rescue Kitty, but it's out of the frying pan and into the fire, because once he finds out that she's not only smoking hot, but also a) part of the Confederacy and b) a skilled doctor, he holds her hostage to fulfill various needs.

LOVE AND WAR is five hundred-plus pages of fucked up adventures, with Kitty somehow managing to stand strong and survive in spite of the carnage and the battles going on around her, being kidnapped and raped multiple times by multiple men, and being treated like dirt by the men who allegedly love her. Nathan and Travis are both horrible love interests who do terrible things to the heroine. I really admired her as a character; she was tenacious and intelligent and resourceful. Even though she did stomp her foot on occasion, she was also quick to pick up a gun and shoot someone in the chest, if it meant defending herself or someone she loved.

I wouldn't recommend this book to the faint of heart, because it is very violent and gory. It's also very dense. Hagan weighs down the narrative with lengthy descriptions of the battles and the horrors of war. At one point, she actually sits down and has a conversation with Robert E. Lee. Kitty experiences lice and mange and body odor. She sees gangrene, advanced syphilis, and amputations. Some soldiers are frozen solid or forced to eat rotten mule carcasses. At one point, she is kidnapped by Native Americans and treated as their medicine woman. It might be a train wreck, but I spent the better part of today reading this in a fever, desperate to see what craziness would happen next.

GONE WITH THE WIND doesn't have anything on this! I'm giving LOVE AND WAR an extra half-star just because Kitty was so awesome.