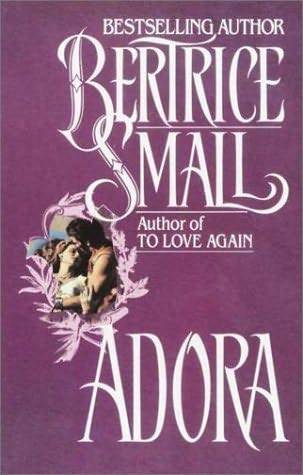 Bertrice Small is the Regina George of historical romance; even if you hate her, you have to admit that she's inexplicably popular & her unapologetic in-your-face personality makes her hard to ignore. I find it amazing that I managed to avoid her books after all these years, despite reading so many historical romance books. I'd been told by many people that I should avoid her work because she was bad, but "bad" is highly subjective. Does Small write in lurid purple prose? Yes. Does she write about unpleasant and illicit activities? Yes. Including child abuse? Yes. Including bestiality? Yes (although not in this one). Including rape? Yes. Will you find the phrase "manroot" in here? I think you know the answer to that.

ADORA takes place in the late 14th century, during the late Ottoman Empire. Theadora is a Byzantine princess (part Greek) who ends up being forced to marry a man forty years her senior, the sultan, Orkhan. A child bride (only about 13), she waits out her days in the convent, where she ends up meeting the sultan's son, Murad, who thinks she is absolutely beautiful and wastes no time "grooming" her to be his sexual partner and future bride at the time of his aging father's death. His father's harem is so large, and Theadora so young, that Murad assumes that he will die before consummating the marriage. NOT SO, BOYS AND GIRLS. NOT SO.

With some intervention on Theadora's father's part, Orkhan ends up being nagged into having sex with his newest bride. And the sultan just so happens to be a pervert, so Theadora ends up getting raped on her marital night, along with some F/F action, sexy feathers, a long wooden phallus, and some bondage. She finds this humiliating, but knows that sex is power, so she decides to use the situation to her advantage and requests remedial sex lessons(!) in order to win Orkhan's heart so as to become his favorite.

Murad does not take kindly to this, and begins to hate Theadora, because he has fetishized the act of taking her virginity to such a great extent that he never (seriously, never) really gets over it. Because how dare she not fall into a weeping mess. Theadora dukes it out with Orkhan's other two wives, who of course are much less pretty, but eventually she has a son and the other two wives can suck it. Later, she ends up getting kidnapped by pirates, along with her son, and we find out that this is an assassination attempt executed by her jealous sister, Helena. But the pirate, who is named Alexander, thinks Theadora is sooo sexy he can't be bothered to kill her. He propositions Theadora, who is attracted to him but refuses out of loyalty to Orkhan, and after courting her for days, Alexander decides enough is enough, drugs her, and then after some F/F action and one wild, aphrodisiac-gobbling orgy later, Theadora thinks she's had the weirdest dream...

Alexander and Theadora end up together after the death of Orkhan, because Murad, in a wild fit of "we loves the precious! no, we hateses her!" invites her to be a part of his harem instead of his wife, and then actually calls her a whore. Because chicks - especially princess chicks - totally dig being called whores. Alexander and Theadora are very happy together, but jealous Helena and Murad are jealous (especially since Helenda propositioned Alexander, who lol'd and said she was too ugly and whorish). So Helena teams up with the sultan, arranges for Alexander to be assassinated, and then after that, for Theadora to be kidnapped and sold into slavery to the sultan.

Murad is basically a murderer. He's also a rapist. He rapes Theadora their first two times together. Then Theadora realizes that it's all her fault(!!!!!1!!) and comes to her senses and says, "Yes, I'm so happy you bought me as a sex slave," and begins to play harem politics in earnest while also currying favor with her husband and making the best of this situation. Harem politics get intense when Murad takes on another bride who, of course, hates Theadora. When sons get into the mix, things get really crazy, as everyone tries to force the emperor to play favorites, and nobody (except Theadora) wins.

ADORA has a lot of things in it that will either disgust, outrage, or squick people out. First off, the writing is very cheesy. Penises are called "manroots" and the heroine's breasts are referred to as "coral-tipped cones" many, many times. I did give this book bonus points for using the word "fuck" (and, more naughty still, "ass-fuck"), as that is a word that tends to be danced around in historical fiction romances published before the 1990s. There is also a lot of pedophilia. All the bad guys - and some of the good guys - have sex with underrage men and women. Which I guess happened somewhat more often back then, but that still doesn't mean that I'm cool with reading about it now, even if it was...*shudders*...canon. I'm sure this will upset some people, so be forewarned that it's in here, and yeah, it can be graphic. There's also some pretty brutal torture scenes. Especially towards the end, when one of the characters commits an act of treason and gets a pretty unpleasant and grotesque punishment that is, again, very detailed. And then there's the fact that every single love interest rapes Adora at least once.

If ADORA were written even slightly differently, I think I would have hated this book. It has so many subjects in it that I hate. But the plot is action-packed, and Bertrice clearly knows a thing or two about history. Even though I rolled my eyes or winced in disgust, I still couldn't put the book down. Imagine if V.C. Andrews co-opted GAME OF THRONES...I think that would be a pretty close approximation of what you could expect from this book. Icky sex, court intrigue, families dueling it out over power struggles, and rape. Books like these just aren't written anymore - to be honest, I don't think they could be...at least not traditionally - and whether that's a good thing or a bad thing is a matter of speculation. I, personally, liked it, but I can see why others wouldn't.

P.S. Anyone else ever notice that in a Bertrice Small book, the villain always seems to have a thing for doing it up the butt? BECAUSE I NOTICED.