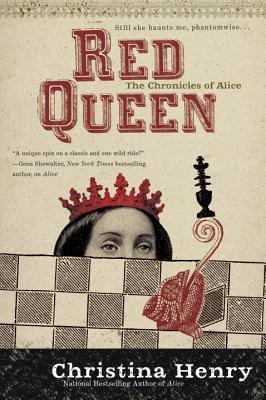 ALICE was an unexpected but pleasant surprise for me. I don't read a lot of fantasy and I'm picky about retellings - unless they bring something new to the table, I don't really see the point in them. But ALICE was a dark, alien retelling of a familiar story, about a dystopian world run by sadistic crime lords, where magic is outlawed, and everyone fears for their lives - and sanity.

ALICE was a four star read that came close at several points to verging on five. The world-building was original, the villains were terrifying, and Alice was a strong character who managed to pay homage to her original namesake (I thought). Of course, when I saw book 2 was going up on Netgalley, I applied for an ARC immediately. And when I got said ARC, I did a little happy dance before settling back down to read.

Here's the thing. While reading ALICE, I was glued to the book. There were nights when I only got about 4 hours of sleep before working my overnight shift because I couldn't put the book down. It was so compulsively horrific that I had to find out what happened next. With RED QUEEN, I found myself reading complacently to a point, upon which I set it down and forgot about it for a little while. It isn't a bad book, it just doesn't have the same tight, compulsive writing style as before.

Alice managed to survive her adventures in the previous book and now, with Hatcher, continues on in her journey, which takes them to a small village on the edge of a blazing ruin. The place is glowing with magic, magic that belongs to three key players: red, white, and black...as well as another monster, a goblin, who is nothing like your mother's goblin king who was content to sing David Bowie songs while dancing around in a silver leotard. No, this goblin - he means business.

Henry weaves some celtic faerie lore in with this second book, and even manages to squeeze in that infamous quote - "off with her head!" - before the book is over. There was a clear effort and I do want to say that I could appreciate the consistency with the writing. The story, however, was completely different in tone and mood. If ALICE was Tim Burton, RED QUEEN is Angela Carter: unevenly paced, needlessly melodramatic, and aspiring to far more than it needs to to get the job done.

RED QUEEN was an okay sequel, but not great. I think it falls prey to that hated of all series-related conditions "middle book syndrome." I am curious to see how Henry chooses to bring this to a close, however (I'm assuming it's a trilogy), so all is not lost!