Fires of Winter by Johanna Lindsey 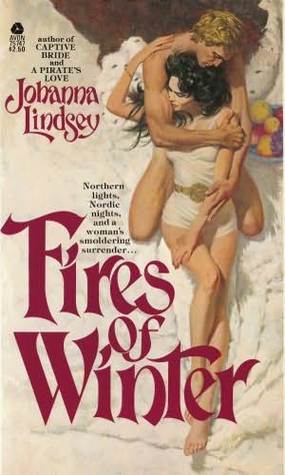 If you peruse the bodice ripper lists on Goodreads, you will consistently see two names near the very top the list: Kathleen E. Woodiwiss and Johanna Lindsey. These two authors might not be the best writers in the genre, but they are prime examples of the most lasting and the most successful. I have a love-hate relationship with Woodiwiss's books - sometimes they're on on point, sometimes they miss the point - but I'd never actually read anything by Lindsey. I intended to rectify that.

FIRES OF WINTER is currently $1.99 on Amazon, as are some of the other first books in some of her other series, DEFY NOT THE HEART and WARRIOR'S WOMAN. I bought three of her books in three different genres  - Medieval, Regency, and futuristic romance - to get a broad picture of her writing style. Since I like historical bodice rippers, I thought I'd start with FIRES OF WINTER.

FIRES is a Medieval Viking romance. The heroine, Brenna, is a Celt, pledged to a Viking by her father. She's unenthusiastic about the marriage but is willing to go through with it for the sake of honor. Brenna likes honor. And swords (no, that's not a sexual pun). The second most important thing that you need to know about Brenna is that she eschews anything feminine. When we first meet her, she's barging in to stop a rape, swinging her sword around while dressed in drag. Unfortunately, she doesn't stop the rape before it happens...but oh, well. She tried.

Anyway, the Vikings come and immediately start killing, raping, and pillaging, because the marriage was a lie. Not only do they not honor their agreements with the Celts (who they regard as their enemies because they once kidnapped the leader of their son and held him captive), but the man who was pledged to Brenna - Garrick - hates women and refuses to marry ever again. Why? Because some Bitchy McMeaners dumped him for a merchant with a full purse & he never got over it.

Brenna is the only woman who escapes being raped during the Viking raid because her glowering puts off the Vikings. They take her and the other Celtic women - including Brenna's half-sister, Cordella - to the Viking home, and Brenna is informed that she is a slave. She promptly throws the first of many temper tantrums, informing anyone who cares to listen that she doesn't do "woman's work." Nobody really punishes her for this. She gets lectured a lot instead, and at one point she gets thrown into a punishment cell - but the hero has second thoughts immediately afterward, so I'm not sure that really counts...

Speaking the hero, when Garrick comes back from his hunting trip, he's surprised to see Brenna in his bed. Especially what with his complete disavowal of women. But he's attracted to her, despite her stubbornness (and his hatred), and eventually rapes her after growing exasperated with her constant insults and refusal to do any sort of labor. Brenna is initially terrified because Cordella, who was jealous that her husband found Brenna way more attractive than she, has been feeding Brenna lies about how painful sex is, and how the act of intercourse is on par with torture or death. So after the first rape, Brenna actually thanks her rapist. Because she's like, "Oh, yay, that wasn't bad at all! NOW TO TEACH THAT LYING COW A THING OR TWO ABOUT HOW I FEEL ABOUT LIES."

Priorities. Brenna has them.

I think my biggest problem with this book is how the relationship between Garrick and Brenna plays out. Brenna's character is incredibly annoying. I could see how she could be a strong female character in another light, but the tantrums, crying, and inane arguments really made me dislike her, as did her insta-love with the hero. Garrick isn't much better. Because he got his heart broken by a woman, once, he's decided that all women, with the exception of his mother (who can do no wrong) must pay. I really hate the Madonna/whore complex, and Garrick has the worst case of it I've seen in ages.

The way rape is portrayed in this book is also problematic. I would consider what transpires between Brenna and Garrick rape, because most of the time, sex begins with her begging him or telling him not to. Most people would probably call this "forced seduction" because Brenna usually decides by the end of it that she's game after all, but it's still difficult to stomach. Especially since rape in this book is kind of divided into two categories: there's the hero's version of rape, where it always turns out to be good in the end, and then there's villainous revenge rape, where the rape is done by a bad guy because he gets off on pain or wants to hurt someone else through her, etc. etc.

Even Garrick himself admits it's rape, because at one point, Brenna asks him why he won't free her. Then he tells her that as a freewoman, she would have the right to refuse him as a lover, and he doesn't want to give that up. Yeah, you read that right. "I won't free you, because then I won't be able to legally rape you anymore." That just happened. It's there - in print.

Another problem is that not much happens. Maybe I could have mustered up some interest if this were crazysauce OTT goodness in the "it's so bad it's good" way, a la Betrice Small, but there are very few scenes with any action. There's an escape attempt, a surprising twist with the Other Woman that I did not see coming (which I appreciated), a couple fight scenes, and a birthing scene. Most of the book, though, consists of Brenna and Garrick arguing with each other, Brenna throwing another tantrum, and then Garrick getting frustrated and either a) threatening her with violence or rape, b) storming off to rage-hunt in the woods, or c) telling other men not to touch her. There are only so many times I can stand to see the heroine say, "Nay--nay!" This book danced all over that limit. Brenna says "Nay!" so many times, she's pretty much a horse. The overuse of "Nay" and "'tis" read more like written tics than they contribute to the historical accuracy of this book.

I can see why people might like FIRES OF WINTER - it has a lot of tropes that people find titillating (hero with issues, captive romance, Viking, "strong" heroine) - but this book wasn't for me at all. Trying to brush off the hero's rapes and portraying him as a "damaged" good guy caused the narrative to give off some unpleasantly mixed signals. Ditto Brenna's tomboyishness when juxtaposed with her completely irrational attraction to the man who treated her like dirt. I would have liked this book more if Garrick had been portrayed as the ruthless, unfeeling man he was & Brenna was portrayed as slightly less childish. But they weren't, so I didn't. I do love that cover, though. *_*