Sin in the Second City: Madams, Ministers, Playboys, and the Battle for America's Soul by Karen Abbott 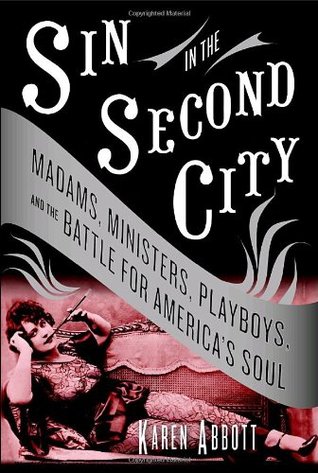 Get ready to clutch your pearls, because this tawdry piece of history is something you didn't learn in high school. SIN IN THE SECOND CITY, in case its title wasn't warning enough, is about prostitution in turn-of-the-century Chicago, specifically the Everleigh Club, which was a brothel run by two gently-bred sisters, Minna and Aida Everleigh.

One of the criticisms of this book is that the author, Karen Abbott, takes a lot of liberties with the narrative. It reads like one of those trashy but epic sagas from the 1970s, with its purple prose, sensationlist writing, and scandalous content. I personally like those kinds of novels, so that was pure heaven for me and kept the tone from being too dry (something I hate when reading nonfiction, because it makes me feel like I'm being lectured at, and then I get bored and inevitably lose interest), but if that is a peeve for you, then yes, you will probably not like this book.

The saga spun these pages is too complicated to recollect completely, but the gist is that the Everleigh Club was the best place to go if you wanted to sleep with a woman who was not your wife. Minna and Aida wanted to be the best damn madams in Chicago, and they were willing to spend money to do this. They hired doctors to check out the girls and make sure they were healthy and free of disease; they fed the girls and the guests well, with totally sumptuous feasts that made me drool a little just from the description; and the decor was, literally, out of this world - think fountains that gush scented oil, and entire rooms done completely in gold leaf, with a gold piano, to boot!

Also of note is a prostitute from China named Suzy Poon Tang (apparently where the slang "poon tang" comes from) who was so good at her job, that she ended up getting married to one of her clients after just a few sessions of working at the Everleigh Club. There was also some brouhaha when a black boxer, Jack Johnson, wanted to come into the club. Because segregation was still active at this time, the sisters were highly reluctant, but his manager basically forced them into relenting; it worked out, though - he was hot, the prostitutes - "butterflies," they were called in Everleigh - adored him, everybody had a great time, and segregation got to suck it...literally (one would assume).

You can probably guess how the story ends. People in power decided that vice was becoming too unpopular and they began systematically cracking down on pleasure houses as tales of "white slavery" (read: middle or upper-middle-class girls getting tricked into the sex industry by mustache-twirling con-artists) began saturating the papers, and putting fear into decent folk. Everleigh Club was one of the last to go, and signified the downfall of an era. Some of the names in here you will probably recognize, because when some of the bigwigs lost their hand at prostitution, they turned their attentions to the big, booming industry of crime started by Al Capone and Jim Colosimo.

SIN IN THE SECOND CITY was a fun book to carry around with me in public. I had a lot of people ask me what it was about, and their reactions were quite priceless in some cases. I enjoyed learning more about an era that I didn't really know much about before this, and it was cool to learn where the phrase "poon tang" actually came from. I do feel like the book was longer than it needed to be, especially towards the end, it felt like the content was being stretched thin. But if you like history, and if you like trashy historical romance novels, you and this book will get on like a house on fire.